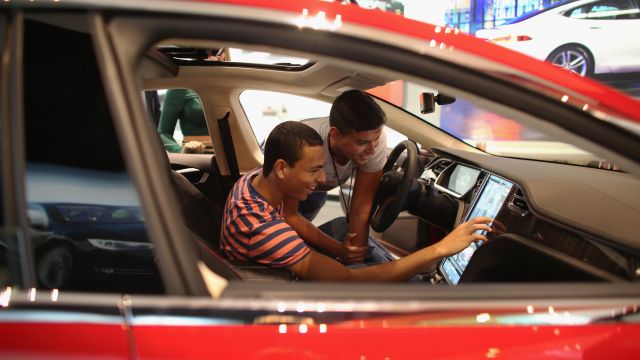 SMS
You Could Probably Afford Tesla's New Car If It Comes Out On Time
By Katie Link
By Katie Link
February 10, 2016
Tesla's trying to make a car that's right for everyone's wallet. Let's just hope it's here in time to enjoy that extra federal tax break.
SHOW TRANSCRIPT

So you want an electric car and you want it to be a Tesla. But you also still want to pay your bills and have money left over to eat three times a day.

Tesla's gearing its next electric car, the Model 3, toward average consumers. And the price seems right: $35,000.

But Tesla wants to make sure you know there’s a chance you could get the new Model 3 for even cheaper.

Several states offer big incentives for going green. Take Colorado, for example, drivers there can get $6,000 back in tax credits for buying electric. And Texas motorists could get up to $2,500 back in rebates.

And the tax credits don’t just depend on what state you live in. The IRS will reward plug-in electric vehicle owners with up to $7,500 as a sort of "thank you" for helping the environment.

But there’s a catch. These federal credits begin to expire after a manufacturer sells 200,000 vehicles for use here at home, and Tesla is getting kind of close.

Though, Elon Musk and his team don’t have the best track record for being on time. So if the Model 3 ends up getting delayed, most of us could miss out on some of the extra tax credits.

Still, a $35,000 sticker price is way more affordable than Tesla’s other offers.

But if the company really does want to have a serious presence in the "mass market," it better get working. Chevrolet is ready to roll out its Bolt EV next year at a price of $37,500.