Would You Pee In Your Socks To Charge Your Phone? 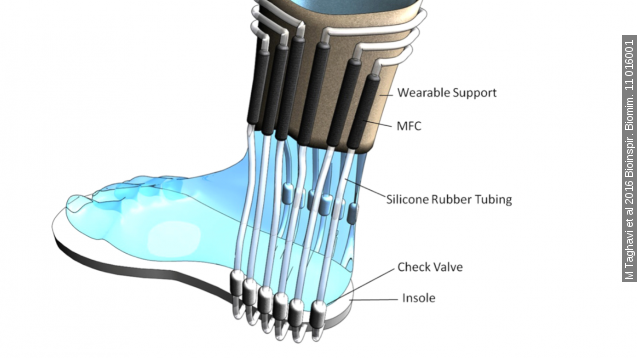 SMS
Would You Pee In Your Socks To Charge Your Phone?

By Mikah Sargent
December 18, 2015
A group of English researchers has found a way to turn human urine into electricity: with microbial fuel cells (MFCs) strapped to socks.
SHOW TRANSCRIPT

Science has a clever use for your urine, and, no, it's not treating jellyfish stings.

A group of English researchers and roboticists have designed a urine-powered generator that fits around your foot — it's sort of like a tube sock.

The tube-sock-like device is made up of a series of microbial fuel cells or MFCs (more on those in a minute), rubber tubing and a pumping mechanism. (Video via University of the West of England)

Microbial fuel cells derive their power from the chemical processes of microorganisms.

"It's just like leaves on your lawn. Those creatures, as they start decomposing, that represents a pretty potent fuel source: glucose, for example. ... That's a very useful fuel and what I mean by as a fuel is something that a microorganism can use to acquire energy from," said Naval Research Laboratory research chemist Dr. Lenny Tender.

The MFCs are fueled by urine, which is pumped into each fuel cell using a simple action: walking.

So think about it: A person could use their own bodily waste as well as their physical activity to derive power from these fuel cells.

The researchers were able to power a small electrical device that sent out the message "World's First Wearable MFC" repeatedly. The team hopes to apply this research to military applications, survival kits and outdoor equipment.

That's cool and all, but I'm waiting for the day when I can use that, uh, extra fluid to power my phone. Running low on battery? Chug a bottle of water and voilà — more time to spend on Twitter!