'World's Saddest Polar Bear' Gets A Break From Chinese Mall 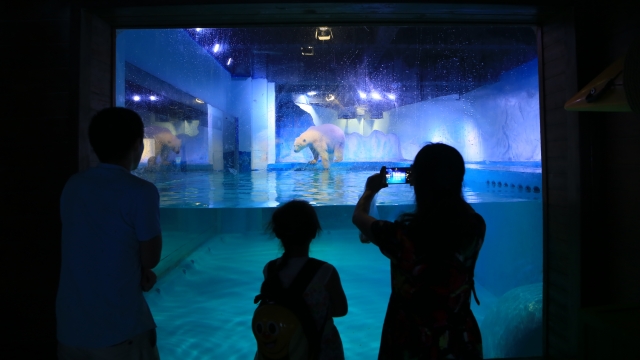 SMS
'World's Saddest Polar Bear' Gets A Break From Chinese Mall
By Ryan Biek
By Ryan Biek
November 14, 2016
Pizza will move to the park where he was born while his current home is renovated.
SHOW TRANSCRIPT

The "world's saddest polar bear" is moving out of a Chinese shopping mall, but only temporarily.

The 3-year-old bear, named Pizza, will move to the park where he was born while his current home is renovated.

Pizza gained the "saddest bear" moniker after an animal rights campaign spread the word about his living conditions.

Not only is Pizza's current enclosure deemed too small, but visitors pound on the glass and snap flash photos. Animal rights advocates say the bear has been showing "classic signs of mental distress."

Pizza's renovated space will reportedly be twice as big, but other details haven't been released –– including when the bear is expected to return.

Shoppers rushed to see Pizza after news of his move broke. On Sunday, the mall organized a going-away party for the bear.

Some wonder, though, if Pizza is being moved because his health has declined too much for him to be put on display.

China does not have an animal welfare law in place, and malls have turned to holding wild animals to attract shoppers.