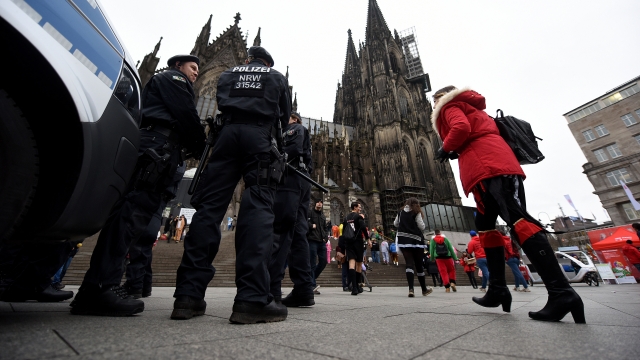 SMS
Women Report Sexual Assaults At German Carnival, Including A TV Anchor
By Samantha Crook
By Samantha Crook
February 6, 2016
Reports of sexual assaults at Germany's Carnival celebrations were high. One TV anchor said she was assaulted during a live broadcast.
SHOW TRANSCRIPT

Germany's pre-Lent Carnival celebration in Cologne kicked off with a record number of reported sexual assaults, despite heightened police presence.

One of those reported assaults happened on live TV. A reporter said she was groped and kissed during a broadcast. The outlet, RTBF, chose not to re-air the video, but the incident highlighted broader issues of sexual assault in the country.

The Belgian outlet later released a statement from the reporter who said the men involved were "young people speaking German."

The evening sparked debate over the country's immigration policy, and it's also created some tension between migrant populations and German-born citizens, specifically those from the right-leaning PEGIDA Party.

RTBF said the Carnival incident wasn't connected to New Year's Eve assaults, except by the "lack of respect for women ... shared by people from all walks."

Some festivalgoers shared a similar sentiment. One tourist from London pointed out sexual assault was an issue in England, too. She told BBC, "It's not a refugee crisis, it's a men crisis."

"We are not afraid," a festivalgoer told BBC.

RTBF says an organization for journalists expressed "willingness to bring civil actions," given a reporter's vulnerable position during live broadcasts.