These Women Are Fighting ISIS 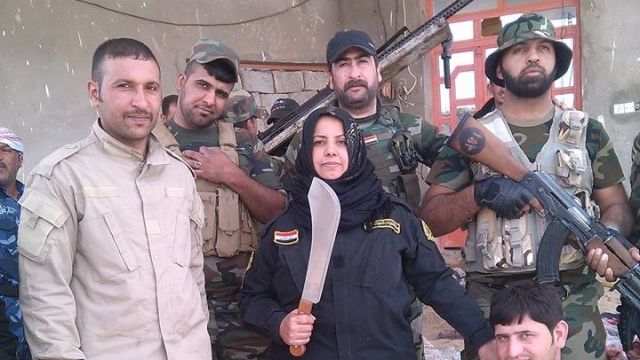 SMS
These Women Are Fighting ISIS
By Jake Godin
By Jake Godin
September 29, 2016
Female fighters aren't uncommon in Iraq and Syria, but one has turned to some pretty extreme methods.
SHOW TRANSCRIPT

This is Wahida Mohamed. Also known as "Um Hanadi," she's part of a tribal militia fighting ISIS alongside the Iraqi Security Forces.

Her methods are ... extreme. She claims to have beheaded and cooked the heads of ISIS fighters she's killed.

She told CNN this after sitting down with a reporter in a recently liberated area in northern Iraq.

"I fought them, I beheaded them, I cooked their heads, I burned their bodies," Um Hanadi is interpreted as saying during a CNN interview.

Describing herself as a "housewife," she told CNN there have been many attempts to assassinate her since she decided to fight terrorism in 2004.

The ISF seem to support her, too, providing her and her group with supplies.

While the idea of women in Iraq fighting ISIS may seem a little surprising, female Kurdish militia fighters are quite common both in Iraq and Syria.

In Iraq, there are the female peshmerga, who fight ISIS in the north.

And in Syria, there are the YPJ, or Women's Protection Units, who have battled ISIS in northern Syria since the militia was founded in 2012.