Without Kevin Durant, What Does OKC Do About Russell Westbrook? 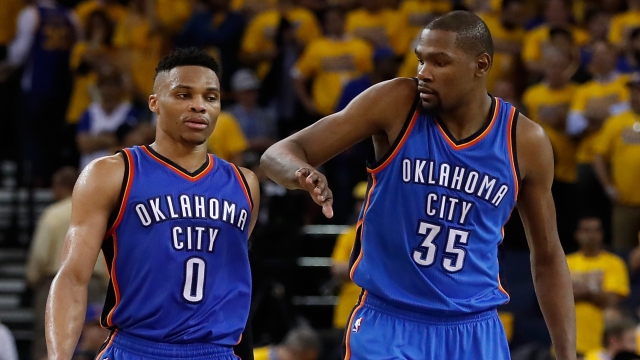 Durant is leaving the Oklahoma City Thunder to join an already star-caliber group with the Golden State Warriors.

While the open market worked wonderfully for Durant, his departure puts OKC point guard Russell Westbrook in a tough spot. Westbrook only has one more year left on his contract.

There are really two routes the Thunder can go: OKC can play the year out with Westbrook leading the squad and either have him sign an extension or take a risk and try to sign him next offseason.

"If they lose Russell Westbrook, then they've lost everything from this organization. They're going to try and figure out a way to sell him, to put his foot down and really take over this team," ESPN's Royce Young said.

Or there's the option of trading Westbrook and getting something in return.

"You can't lose Kevin Durant and Russell Westbrook and get nothing in return. You probably have to think about trading," Fox Sports' Jason Whitlock said.

"You have to put a line in the sand: Here's a date — commit or we're out," Fox Sports' Colin Cowherd said.

Westbrook and Durant have spent eight NBA seasons together, making the playoffs six times. The problem is the Thunder have been bounced from the playoffs empty-handed every time.

Should Westbrook stay, he could have a young core group of players around him to work with in OKC. The NBA season begins in October.

This video includes clips from The Oklahoman and KNBR, and images from Getty Images. Music provided courtesy of APM Music.