With Cease-Fire In Place, Syrians Flood Streets To Protest Regime 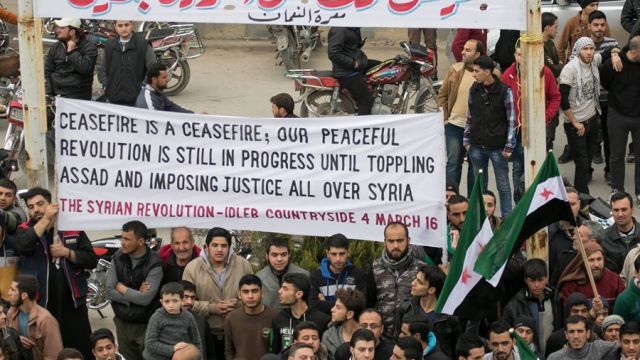 SMS
With Cease-Fire In Place, Syrians Flood Streets To Protest Regime
By Jake Godin
By Jake Godin
March 4, 2016
After a cease-fire brought the barrel bombs and airstrikes to an end, people in rebel-controlled Syria took to the streets to protest the regime.
SHOW TRANSCRIPT

With a cease-fire (mostly) in effect, Syrians in rebel-held territory are back to peacefully protesting the regime.

People protested throughout rebel-held territory, including around Idlib and Aleppo and in the south. It was a lot like 2011.

The violence hasn’t ended though. Both sides have reported cease-fire violations.