Julian Assange's Comment About Hacking Trump Was (Probably) A Joke 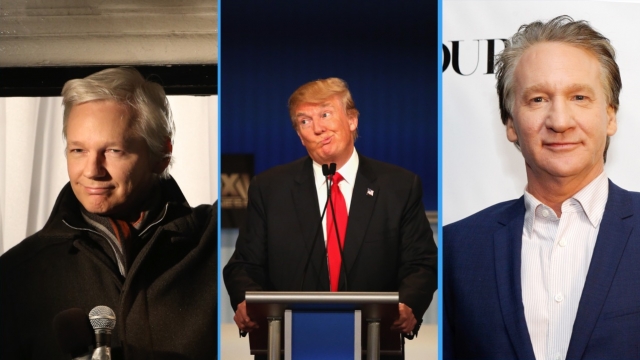 WikiLeaks is walking back claims that it's trying to hack Donald Trump.

That was WikiLeaks founder Julian Assange on "Real Time with Bill Maher" on Friday night. Assange appeared on the show via video message from the Ecuadorian Embassy in London, where he's been since 2012.

After some back and forth about why WikiLeaks released a trove of Democratic National Committee emails last month, Maher asked about Trump.

The Republican presidential nominee has refused to release his tax returns, saying he can't because they're under audit.

But that response hasn't satisfied some of Trump's critics, who suggest his failure to release his taxes points to something fishy, like possible ties to powerful Russians.

The Trump campaign has denied those accusations.

In a tweet earlier Saturday morning, WikiLeaks claimed that it wasn't actually working to hack Trump and that Assange's statement was just a joke.

Still, Assange has said before that WikiLeaks had more material related to the 2016 election that might be published.

The whistleblowing website released almost 20,000 emails from the DNC just one day ahead of the Democratic National Convention.

Some of those emails showed that high-ranking members in the committee were working to undermine Bernie Sanders' presidential campaign and resulted in some top DNC officials stepping down.

This video includes clips from HBO, Donald J. Trump for President Inc. and CBS and images from Getty Images.