Why Your Favorite Craft Brewers Are Selling Out To Big Beer 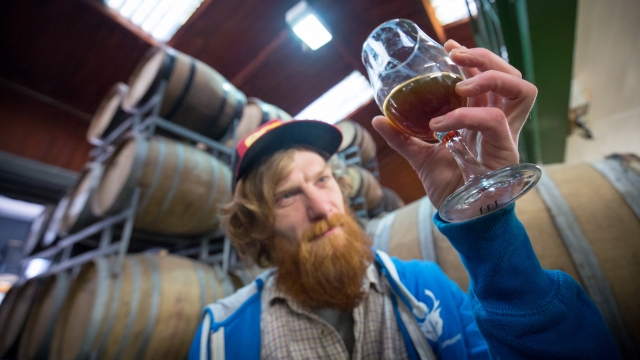 SMS
Why Your Favorite Craft Brewers Are Selling Out To Big Beer
By David Cawthon
By David Cawthon
July 1, 2016
Sales of craft brews are on the rise. So why, in the golden age of beer, are some indie brewers selling their booming ventures to the big guys?
SHOW TRANSCRIPT

Craft brewers — we think of them as the sanctuaries from the Budweisers and Millers of the world. But as you defiantly sip that grapefruit cactus, octuple-hopped chili ale, know it might actually be property of the big guys.

Quiz time. Which of these is a fully independent brewery?

Actually, none of them are.

It's not the end of small beer. There are still thousands of independently owned breweries, but a few each year get snatched from the flock.

Case in point: Elysian Brewing is in Seattle, a city where craft brewers account for about a third of the market. But after nearly two decades of operating independently, Elysian sold to AB-InBev in early 2015, becoming one of several acquisitions in just the past five years or so.

In 2011, AB-InBev swallowed up Chicago-based Goose Island. In 2014, the macrobrewer snatched up Blue Point Brewing in New York and 10 Barrel in Bend, Oregon. And in 2015, Four Peaks in Arizona, Los Angeles-bred Golden Road and Elysian — to name a few.

So why, as Budweiser seems to dis the little guys by calling them "small," "a hobby" or "imported," is its parent buying them up?

It's simple. Craft brewers are the new "Kings of Beer" — when it comes to sales growth, anyway. So if you can't beat 'em, buy 'em.

Bud and Bud Light's market share has been slipping, but their parent company's niche brands — like Goose Island — are trending upward, like most of the indie market.

So it's no surprise it pays to be small-ish. If you're looking at revenue per hectoliter (that's metric for a lot of beer), the largest independent of the bunch, Samuel Adams, has outpaced its much bigger rivals for years, though some recent forecasts are a bit gloomier.

Which means we're hearing the old rumors again — that bigger operations might buy out billionaire Jim Koch, head of the Boston-based brewery. But why would somebody like him ever give up such a seemingly sweet gig?

Put yourself in the shoes of the smaller brewers. If you get bought out, things get easier for your baby — the business you built with your blood, sweat and tears. It gets a wider distribution, and your swill is cheaper, so more people drink it. And we haven't even touched on finances, supplies, property, equipment and other headaches that are now someone else's problem.

Founder of Bell's Brewery Larry Bell kinda summed up what many smaller brewers like him are feeling when he told Bloomberg: "We are in the middle of the end of the beginning of craft beer. All the pioneers who started it off are getting older, and they have to look at an exit strategy."

So the next time that you're pissed your favorite small brewer just took that exit and "sold out," remember it's nothing personal. It's just business.