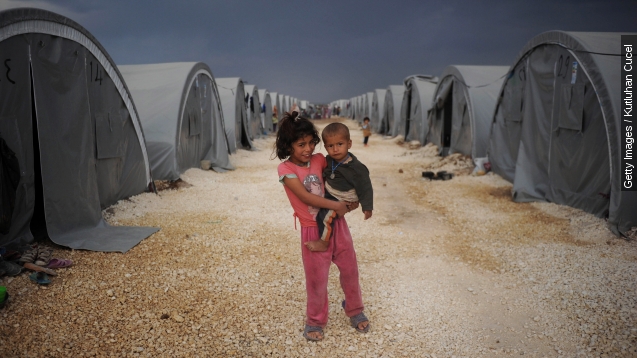 The United Nations' aid branches are running out of money.

That's why companies like Kickstarter, Airbnb and Google are encouraging people to donate to the U.N.'s refugee agency.

That might seem a little weird. I mean, this is the U.N. It has a budget in the dozens of billions of dollars. It must have enough money, right?

Assessed contributions are required dues for every member state, and they're based on the size of the country's gross national income. That means the United States is paying the largest amount of dues, making up 22 percent of the U.N.'s assessment contributions, while the least developed countries, including Bhutan, are paying as little as .001 percent of the budget. These contributions pay for the U.N.'s regular functions, like the General Assembly, Security Council and peacekeeping missions.

But the mandatory dues don't pay for everything.

The voluntary contributions are what pay for the U.N.'s humanitarian and development agencies — including refugee response. This makes up about half of the U.N.'s budget.

Each year, the different U.N. organizations ask for their budget, and member states make pledges of what they want to donate.

Google's $11 million contribution may seem like a lot, but it's pennies compared to the billions of dollars needed to address the crisis.

For example, this year the U.N. asked for $8.4 billion for response to the crisis in Syria and the effects in the region, but so far, that response is only 38 percent funded, even with the U.S. pledging $1.6 billion.

And that level of underfunding is creating big problems.

And funding shortfalls have forced the World Food Programme to cut food assistance to Syrian refugees in neighboring countries by up to 50 percent.

Experts say the lack of food, medical help and other resources for refugees in and around Syria is one of the biggest factors driving people to Europe.

The UN high commissioner for refugees is so fed up with the budget problems, he told The Guardian major emergencies like what's happening in Syria should be funded by the mandatory dues, not by voluntary contributions.