Taiwan Has To Use A Different Name, Flag and Anthem For The Olympics 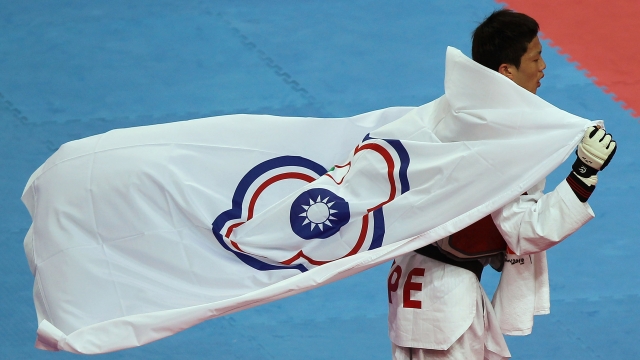 SMS
Taiwan Has To Use A Different Name, Flag and Anthem For The Olympics
By Ethan Weston
By Ethan Weston
August 6, 2016
During the Olympics, Taiwan is known as Chinese Taipei because of a 1979 resolution by the International Olympic Committee.
SHOW TRANSCRIPT

If you watched the Olympics opening ceremony, you might have noticed something a bit off about one team in particular: the Chinese Taipei team.

That flag doesn't belong to any country, and Chinese Taipei isn't a real place.

SEE MORE: Olympic Viewership Is Down, But ... Skateboarding May Turn It Around?

Chinese Taipei is the name that the Republic of China — better known as Taiwan — has to go by during the Olympics.

That's because in 1979 the International Olympic Committee passed a resolution officially giving Taiwan the name "Chinese Taipei" and banned the country from using its flag and national anthem.

So when Taiwanese Olympians receive a medal, they'll hear and see this.

But the country's actual national anthem and flag sound and look like this.

And since then, China has fought fiercely against the notion Taiwan might be a separate nation.

China and Taiwan follow a one-China policy, which recognizes there is only one real China — but both countries believe their governments should be the one in charge.

That one-China agreement may be faltering with the election of Taiwan's new prime minister, who omitted it from her inaugural address and whose party's charter calls for independence.

Now, only 22 nations recognize Taiwan as the Republic of China. But how Taiwan sees itself has also been changing. Younger generations are seeing themselves more as Taiwanese and protesting economic integration with China.

Correction: A previous version of this video incorrectly identified the National Anthem and National Flag Anthem of the Republic of China. The video has been updated.