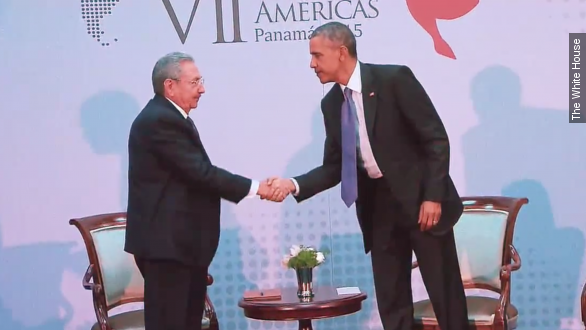 "So we are willing to discuss everything. We need to be patient — very patient," a translator for Cuban President Raul Castro said Saturday. (Video via The White House)

During his historic meeting with President Obama in Panama Saturday, Cuban President Raul Castro urged patience, as the U.S. thaws its complicated relationship with Cuba.

But, with the end of his term in office rapidly approaching and with Republicans who largely oppose the thaw firmly in control of Congress, it's not clear how patient the president can afford to be. (Video via House Republicans)

"The White House has conceded everything and gained little," Sen. Marco Rubio said on C-SPAN.

Republicans like Sens. Marco Rubio and Ted Cruz, who both have Cuban ancestry, have spoken out against the president's actions so far.

Cruz put out a statement immediately following Saturday's meeting, saying President Obama "has shown he is willing to do what nine previous presidents of both parties would not: cave to a communist dictator in our own hemisphere."

But if you're thinking the president's plans, which would open up increased commerce with Cuba, might jive with staunch free-market advocates in the party, you're right. (Video via BBC)

"We've tried an embargo for 50 years. It hasn't worked. ... The reason I call it a form of isolationism is if you apply the embargo ... for any of the other host of countries that have human rights abuses, that would be a policy of isolationism," Kentucky Sen. Rand Paul said at a GOP presidential forum in January.

Despite vocal opposition from the anti-Cuba crowd, two Republican senators co-sponsored a bill in January to lift travel restrictions on Americans looking to visit the island. (Video via Cato Institute)

Sen. Jeff Flake told the Cato Institute, "To me it's just been, really, an issue of freedom. Americans should be able to travel wherever they want."

Factor in that Republicans from major agricultural states like Kansas could look to benefit from trade with a country that imports about 80 percent of its food, and it looks like the split isn't going away. (Video via America's Heartland, CNN)

Then there's the small issue of the American public, which — according to a Pew Research Center poll from January — largely supports stronger U.S.-Cuba ties.