Think Mars Bases Will Have It Hard? Moon Bases Get An Even Worse Deal 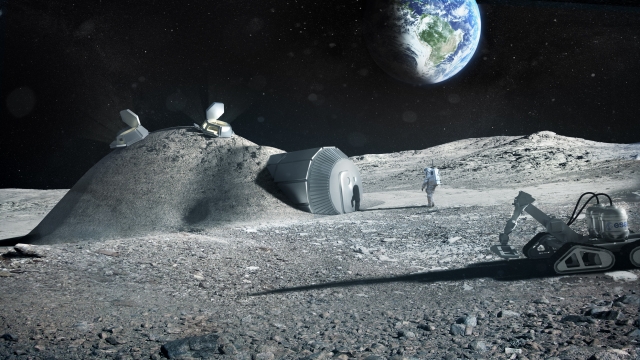 SMS
Think Mars Bases Will Have It Hard? Moon Bases Get An Even Worse Deal
By Evan Thomas
By Evan Thomas
October 14, 2016
There's no place quite as safe as Earth — but Mars is still marginally safer than the moon.
SHOW TRANSCRIPT

There are lots of grand plans to build colonies on Mars these days, but you might be wondering, "Why skip the moon?" Mars is farther and more expensive to reach, and it would be incredibly hard to bring people back to Earth. But all that said, it turns out living on Mars might actually be safer than living on the moon.

Earth has a strong magnetic field, which stops the worst of the radiation from space and from the sun. That field protects the atmosphere, and that atmosphere stops most meteors from ever hitting the surface. Our space habitats will need to protect us the same way.

Mars' magnetic field is very weak, which means radiation is going to be more intense on the surface than it is on Earth.

And that weak protection means Mars has lost most of its atmosphere — and most of its buffer against impacts. Every year, hundreds of meteorites hit hard enough to leave craters.

But it's still better than the moon. It has no magnetic field to speak of, and no useful atmosphere at all. This means radiation is as bad as it is in deep space, more or less.

And while the moon has less surface area to hit with meteors than Mars, a new study finds big impacts are more frequent than we thought — which makes protection from them even more important.

One way to solve these problems is to bring our safety measures with us. NASA is collecting habitat proposals from commercial partners that would protect Mars colonists from radiation and impacts.

The European Space Agency might just dig in to protect its habitats. It proposes burying any future moon bases in 3-D printed shields of lunar dirt.