Why Is Zika Causing Microcephaly Less Often In Colombia Than Brazil? 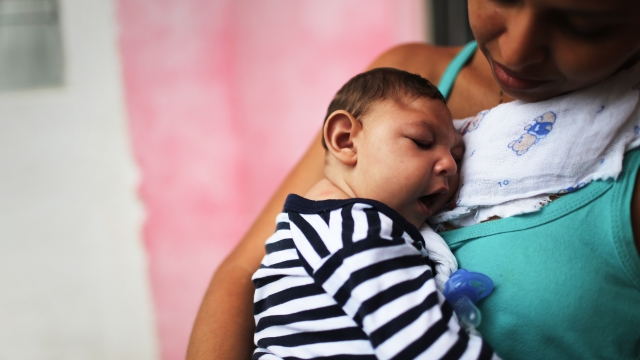 SMS
Why Is Zika Causing Microcephaly Less Often In Colombia Than Brazil?
By Ben Lawson
By Ben Lawson
July 13, 2016
Colombia is reporting only 13 Zika-related microcephaly cases, but there are over 1,600 in Brazil.
SHOW TRANSCRIPT

The Zika outbreak is tearing through many South American countries, but it doesn't seem to be affecting every country the same way.

Brazil has been hit hardest by the disease, and it's seen more than 1,600 cases of the birth defect microcephaly caused by Zika. Another 3,000 may also be linked to the outbreak.

Colombia is the second most affected country, but it only has 13 confirmed cases of microcephaly linked to Zika and 300 under investigation.

This isn't necessarily a sign the disease is less harmful than feared. Colombia's population is about a fourth of Brazil's, and the number of infections could be much smaller.

Cases of microcephaly are also being reported differently. A World Health Organization official says Colombia is only reporting "live births" while other countries are including stillbirths.

The Centers for Disease Control and Prevention has confirmed Zika infections in pregnant women can cause their babies to be born with microcephaly.

But experts still aren't sure if it matters when a pregnant woman is infected. Originally, Brazilian doctors thought infections during the first trimester were most likely to lead to microcephaly, but it's now believed women in later stages are also affected.

While the numbers coming out of Colombia seem encouraging, one expert advised that we'll "have to wait to see what happens."

This video includes clips from WHO, CNN, BBC, Centers for Disease Control and Prevention and CBS and images from Getty Images. Music provided courtesy of APM Music.