Donald Trump Jokes About Heaven While Praying For The Evangelical Vote 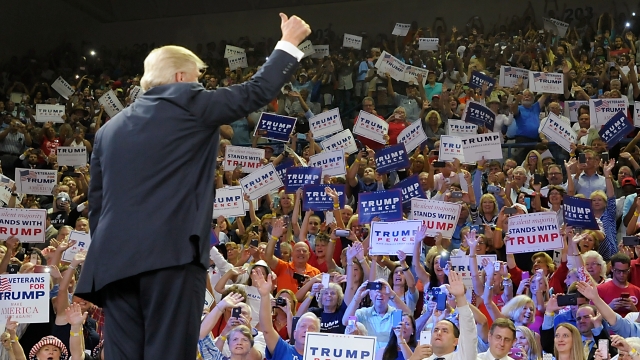 SMS
Donald Trump Jokes About Heaven While Praying For The Evangelical Vote
By Eugene Daniels
By Eugene Daniels
August 11, 2016
Some evangelicals have been reticent to back Trump because of his inflammatory rhetoric.
SHOW TRANSCRIPT

It looks like Donald Trump's pitch to evangelicals has reached Defcon 1. During a meeting Thursday with a Christian group, the GOP nominee called this "the most important election" for people of faith and joked that getting to the White House would get him in good with the big guy.

"Once I get in, I will do my thing that I do very well. And I figure it is probably maybe the only way I'm going to get to heaven. So I better do a good job," he said.

But what's not a joke is how much he'll need the evangelical vote — which is typically heavily Republican — to get to the White House.

But some evangelicals have been reticent to back Trump because of his inflammatory rhetoric. That's never been a problem for other GOP nominees, at least in modern history.

And he's been trying to make the appeal, meeting with church leaders and making callouts during speeches. During his acceptance speech, Trump said, "The support that they've given me, and I'm not so sure I totally deserve it, has been so amazing."

But Trump's campaign doesn't often mention the issues that evangelicals really care about. Issues like abortion and marriage equality rarely, if ever, come up, especially since Trump has turned toward the general election.

And he still didn't mention those issues, even when asking those voters to help him reach the pearly gates.