When Animals Die In Masses, It's Freaky — But Not Unnatural 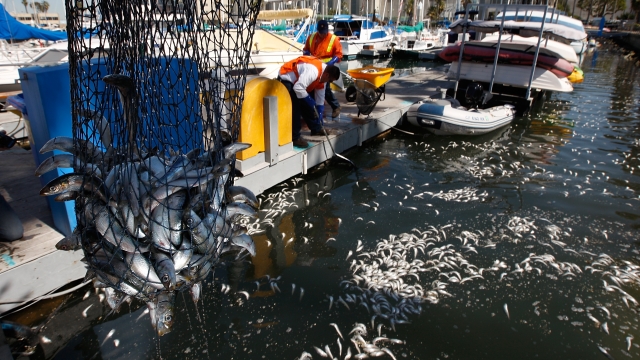 SMS
When Animals Die In Masses, It's Freaky — But Not Unnatural
By Ryan Biek
By Ryan Biek
November 17, 2016
The really creepy part of these die-offs is often the very reason they happen in the first place.
SHOW TRANSCRIPT

The next time the news reports that birds are falling from the sky or schools of fish are floating belly-up, don't panic.

Mass die-offs of animals are becoming more common. But the really creepy part of these die-offs (you know, the mass part) is often the very reason why the deaths happen in the first place.

Earlier this month, thousands of fish were found dead in waterways near Long Island, New York. But far from it being a sign of the apocalypse, officials think a lack of oxygen was to blame.

The fish were believed to have been chased into a canal by predators, and because it was such a big group, there might not have been enough dissolved oxygen to go around.

An even larger die-off happened in New Jersey earlier this year for likely the same reason: too many fish for all of them breathe.

Birds are also common victims of mass die-offs. Depending on the time of the year, thousands of birds will roost together as a group. If something causes mass panic, like fireworks, the birds all fly in different directions at once. Simply crashing into each other at high speeds is enough to kill hundreds at a time.

Yes, humans are sometimes responsible for the die-offs, like when habitats become over-polluted.

But in some cases, the reason is simply too many animals in the same place at the wrong time.

Even if the reason for the deaths isn't a cause for concern, the die-offs can be. They can put a sudden strain on the local ecosystems the animals were a part of.