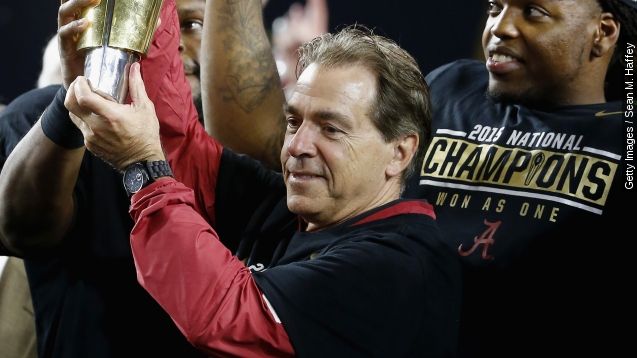 Another year, another National Championship is what it's starting to feel like for the Nick Saban-led Alabama Crimson Tide.

Alabama's 45-40 win over Clemson gave the Crimson Tide their fourth national title since 2009.

The title is Saban's fifth overall; only three other college football coaches have five or more national titles.

Saban's five ties Howard Jones, who saw most of his success in the 1920s and '30s with USC, and Bernie Bierman, who won five with Minnesota in the '30s and '40s.

But Saban's still taking a backseat to Bear Bryant, the former Alabama head coach who won six national titles in the '60s and '70s.

The only coach in the last 35-plus years with nearly the amount of Saban's success is Ohio State's Urban Meyer. He's got a higher career win percentage than Saban (.851 percent vs .765 percent) but only three national titles — two fewer than Saban.

Other than that, it's all Nick Saban's world, and other coaches are just living in it. The 64-year-old head coach has said in the past he wants to finish out his career at Alabama, and he hasn't hinted at retiring anytime soon. Sorry, every other college football team.

This video includes images from Getty Images, George Grantham Bain, Jweiss11 and the University of Maryland.