Where Did Sanders Stand On Health Care In The '90s? Behind Clinton 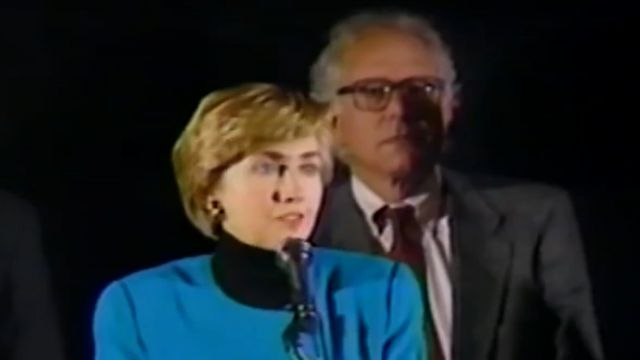 SMS
Where Did Sanders Stand On Health Care In The '90s? Behind Clinton
By Kaileen Gaul
By Kaileen Gaul
March 12, 2016
Former Secretary of State Hillary Clinton asked where Bernie Sanders was in the '90s when she was fighting for health care reform. It got awkward.
SHOW TRANSCRIPT

Do you ever feel invisible? Well, Democratic presidential candidate Sen. Bernie Sanders might feel your pain.

During an event in St. Louis, former Secretary of State Hillary Clinton asked where Bernie Sanders was in the '90s when she was fighting for health care reform.

Things got awkward when a member of Sanders campaign tweeted a screenshot of Sanders literally standing right behind her as she spoke at Dartmouth College about health care reform in 1993.

A  Clinton spokeswoman retorted, "Exactly, he was standing behind her. She was out in front."

The Sanders campaign has used snapshots from Clinton's past against her before.

Back in January, Sanders tweeted a thank you card from 1993 from the then-first lady. He potentially tweeted this as a jab at Clinton for attacking his single-payer health care plan.

Not every tweet is contentious, though. The two also occasionally use Twitter to support each other. Clinton notably retweeted Sanders when he said "America's first black president cannot and will not be succeeded by a hatemonger who refuses to condemn the KKK."

And Sanders retweeted Clinton when she sent out a link to donate to Flint.

This video includes images from Getty Images and clips from C-SPAN and NBC.