What Trump Forgot: Conventions, Not Primaries, Pick The Nominee 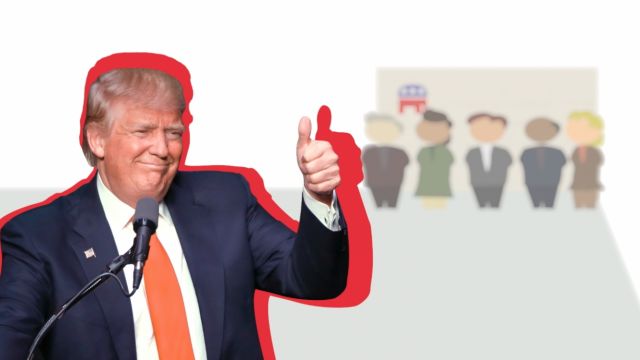 SMS
What Trump Forgot: Conventions, Not Primaries, Pick The Nominee
By Zach Toombs
By Zach Toombs
April 18, 2016
An expert on primary politics explains what Americans are forgetting about the nomination process.
SHOW TRANSCRIPT

"Most Americans think that the primaries are the end of the game," Elaine Kamarck, a primary politics expert with the Brookings Institution, said. "It's not."

She continued: "Americans have forgotten that, in fact, this is not a public process. It's not in the Constitution. This is the process of a political party."

"And they make their own rules?" DecodeDC host Jimmy Williams asked.

"Of course they make their own rules," Kamarck said. "Right now, Donald Trump is making a lot of Republicans very nervous. They are protecting a brand, OK? Coca-Cola wouldn't let Pepsi interfere in its branding. Right? Brands are important. There are two steps to this process. The first step is holding the primaries. That's what everybody participates in and sees. The second step is electing the delegates as a result of those primaries. Now, most of the time, the delegates simply vote the way the voters did in the primaries, but there are Republicans who are so fearful of what a disaster Trump could be at the top of the ticket that they are considering trying to deny him a first-ballot nomination.

"Well, people are making deals," Kamarck said. "They're negotiating. They're saying, 'OK, well, listen. John Kasich, we of the Ohio delegation, we're going to throw our votes to Ted Cruz,' or there are 50 Trump delegates who are going to defect and go to Cruz or go to Kasich. Or Cruz and Kasich are going to decide to cast their votes for Paul Ryan, who didn't even run.