What’s Up With Credentials At Mayweather-Pacquiao Fight? 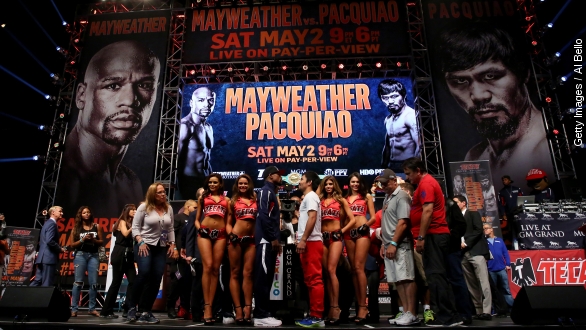 Hours before Floyd Mayweather and Manny Pacquiao squared up at MGM Grand Saturday, a different kind of showdown took place — between journalists and a PR rep.

“It could appear Mayweather could be trying to strongarm more than just Manny Pacquiao,” Sports Illustrated’s Maggie Gray said.

We should note both Beadle and Nichols have been critics of Mayweather’s domestic violence history, which some people thought could be the reason for the credential issue.

“Are we really supposed to believe all these women are lying, including the incidents when there were witnesses, like your own kids?,” Nichols asked.

“Well, everybody’s entitled to their own opinion,” Mayweather said.

That PR rep tweeted neither Beadle nor Nichols were banned from the fight. Swanson told USA Today’s For The Win the situation was a “misunderstanding.”

Beadle later tweeted she was re-credentialed, but was over the whole thing and went home instead. No word from Rachel Nichols.

So, what the hell is going on with the credentials at MGM Grand? Although a revenge ban for being critical and a “misunderstanding” both seem like possible occurrences, we just don’t know.

And judging by headlines, other news outlets don’t quite know either.

A Yahoo Sports writer points out three private companies involved with this fight — Mayweather Promotions, Top op Rank Boxing and the MGM Grand Garden — can choose which media outlets can cover the fight.

He adds, “None of these companies is obligated to provide access to the media for anything. … It is par for the course in combat sports for writers and broadcasters to be denied credentials or assignments due to disfavor from certain fighters or promotions.”

“Is this another example for critics of the sport who say this has become a complete circus?,” Gray says.

“It is. I’ve heard from PR people in other sports who’ve texted me and called me and said, ‘What is going on in that cesspool of a sport?,’” Sports Illustrated’s Chris Mannix said.

The credential issue might be a mess, but not messy enough to stop the fight. Mayweather and Pacquiao are still set to meet in the ring at 9 p.m. Eastern Time.