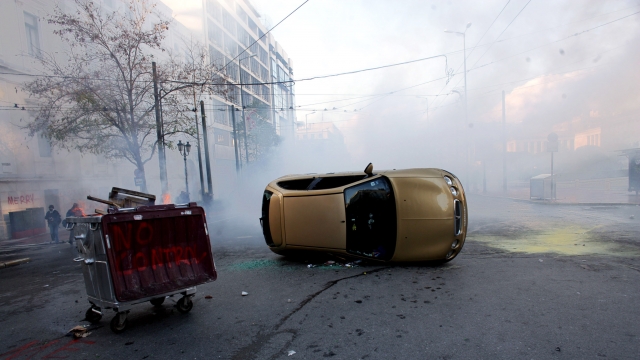 SMS
What It's Like To Be An Anarchist In The Birthplace Of Democracy
By Melissa Prax
By Melissa Prax
May 19, 2016
Greece has a lot of political turmoil, but Athens' Exarchia district is even more heated. We talked to a protester about what it's like to live there.
SHOW TRANSCRIPT

"If a car accident happens, something like that, they [the police] don't want to come, so you have to insist that they come even for ordinary things," a pharmacy owner and resident of the Exarchia neighborhood in Athens, Greece, told Newsy.

This is Greece's anarchist neighborhood. Athens' Exarchia district has a history of political turmoil, like anti-government protests and riots. Those protests aren't just against the current Greek government. They're against any government.

Because of that, Exarchia faces some unusual day-to-day struggles compared to the rest of the city — like little to no police presence.

"I think most of the people who live here — old people, middle-aged people — they would like more police," the resident said.

This pharmacy owner, who didn't want to be identified on camera, has lived and worked in the Exarchia district for 10 years. He said he wanted to remain anonymous because, like many locals, he doesn't want people to assume he's a violent protester. Some people in the district suspect media is tied to the Greek government or will be biased against them, so getting anyone to talk can be tough.

In a country where economic and political turmoil has been overwhelmingly intense the past several years, Exarchia is even more heated.

"The situation in Greece after 2009, 2010 started going worse and worse, so people logically started protesting more and more," he said.

"It all started with the facts with [Alexandros] Grigoropoulos," the resident said.

Alexandros Grigoropoulos was 15 years old when he was shot by police in 2008.

It prompted protests that December in the Exarchia neighborhood and in other cities in Greece. The protesters' main target: the Greek government.

And since then, protesters and rioters have gathered in the anarchist district every year, commemorating the anniversary.

"All the new measures that were taken all of this year about pensions, minimum wage, all this stuff," the resident said.

"So that's when you started agreeing with what the protests were protesting about?" Newsy asked.

"Corruption and economic, they go together. ... I think it was one the result of the other," he said.