What Does Holly Holm's Loss Mean For Ronda Rousey? 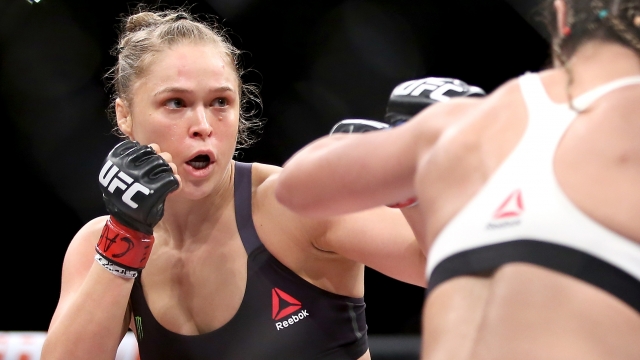 SMS
What Does Holly Holm's Loss Mean For Ronda Rousey?

By Matt Moreno
March 6, 2016
Ronda Rousey will now likely need to defeat both Holly Holm and Miesha Tate if she wants to dominate the UFC.
SHOW TRANSCRIPT

We knew it was a possibility when Holly Holm's next opponent was announced to be Miesha Tate, but nobody thought it was a probablity.

But Tate showed Saturday night that she's more than capable of beating a bantamweight champion — as long as it's not Ronda Rousey.

Tate beat Holm on Saturday for the bantamweight title. In November, Holm beat Rousey for that title. Rousey has defeated Tate twice — once for the Strikeforce Women's Bantamweight Championship in 2012 and again to defend the UFC bantamweight belt in 2013.

So what this means for Rousey is that she'll likely need to win two fights instead of one to show her dominance — one against Tate for the bantamweight belt and another against Holm, the only UFC fight she's ever lost.

And from the sound of it, Rousey's ready to do so. UFC President Dana White says Tate will be Rousey's next opponent.

White said he texted Rousey, who supposedly wasn't watching the fight. Rousey texted him back, "Looks like I’ve got to get back to work." But will she be back in the octagon in time for UFC 200 in July?

"She's scheduled to not come back until October or November, but it doesn't mean I can't ask. ... She did anything that was asked of her and went above and beyond the call of duty. If she wants to stay out until October, I'll let her do that," White told ESPN.

Rousey is currently taking a planned hiatus from MMA and working on filming two movies. White has previously said Rousey wouldn't be back in time for UFC 200, which is being billed as "the biggest event in UFC history."

This video includes clips from UFC, Dish and Warner Bros. / "Entourage" and images from Getty Images.