We Should Have Expected Fallon's Giggly Interview With Trump 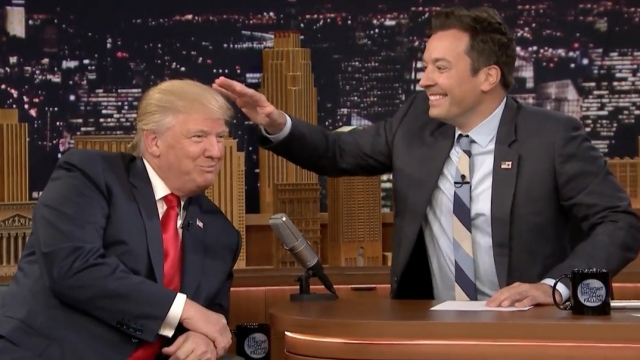 SMS
We Should Have Expected Fallon's Giggly Interview With Trump
By Eugene Daniels
By Eugene Daniels
September 16, 2016
Maybe we should've expected a Jimmy Fallon interview to end with a noogie?
SHOW TRANSCRIPT

Apparently, treating Donald Trump like your personal pet pisses a lot of people off. Jimmy Fallon found that one out the hard way.

After a predictably softball interview that ended in whatever that hair rub thing was, Fallon was taken to the social media woodshed. Anyone who hates Trump trashed Fallon — one person even called him "hell's court jester."

It shouldn't be a surprise the interview didn't cover the hard-hitting issues from the campaign trail. Let's not forget the last time the two were together, Fallon fake-interviewed himself as Trump with Trump.

And Hillary Clinton received much of the same treatment when she was on the show. Even when her email scandal came up, it came with a whole lot of giggling.

"Are you just typing in all caps? Is it like my mom, where everything is in the subject line?" Fallon said.

Whether or not you like Trump and his rhetoric doesn't seem to matter to Fallon. He's not a journalist; he's a late-night host who basically giggles and plays games for an hour. His style has never entailed shaking his fist at any presidential candidate. And he's not going to change that because other people think Trump shouldn't be president.

Lumping Fallon in as a serious journalist isn't fair to the Anderson Coopers, Jake Tappers and Megyn Kellys of the world. But I do hope he never does the hair thing again.