Water Bears Aren't As Cute As The Internet Thinks 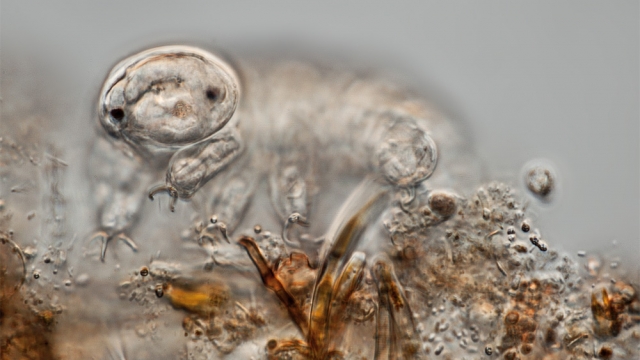 SMS
Water Bears Aren't As Cute As The Internet Thinks
By Leah Becerra
By Leah Becerra
April 15, 2016
Here's why these "adorable" water bears (aka tardigrades) are actually terrifying.
SHOW TRANSCRIPT

Tardigrades, better known as "cute" and "cuddly" water bears, can survive a lot of torture. The tiny organisms' huggability factor is debatable, but the animals' toughness isn't.

Most recently, scientists in Japan thawed out three Antarctic tardigrades after more than 30 years of frozen slumber. And what did the water bears do? Well, one died, but the other two laid some eggs and kept on living.

Just like in extreme heat, drought, pressure and radiation tests before, the water bears slowly started to go about their usual business. And that's why these "cute" little guys are actually terrifying.

They live all over the world, usually in damp moss or dirt, but there are also fresh and saltwater varieties. Tardigrades are also microscopic, somewhat transparent and can walk around slowly on eight legs.

Water bears aren't supposed to live very long — usually about a year at most, but in that time, a tardigrade can lay 30 to 40 eggs.

They also occasionally eat some of those eggs to improve their own health. Other water bear food sources include amoebas, nematodes and other tardigrades. Yes, some are cannibals.

Still think they're cute? OK, let's go back to the part where they can prolong their lives.

Scientists have radically altered tardigrades' environments in studies, and much like cockroaches, the organisms adapt to survive.

The New York Times writes, "Confronted with drying, rapid temperature changes, changes in water salinity or other problems, tardigrades can curtail their metabolism to 0.01 percent of normal." The result is a deep sleep, almost death-like state, similar to the 30-year freezing test.

One time, the European Space Agency sent about 3,000 water bears into space, and guess what? A lot of them survived. No water, no air and cosmic radiation — no problem.

Whether you think the water bear is cute or a terrifying freak of nature, the little guys do deserve a little praise. You see, scientists aren't just abusing them for fun. Tardigrades make good experimental candidates — like fruit flies but hardier.

And maybe water bears could lead to leaps and bounds in cryonics, a type of cold preservation that could allow humans to fall into a frozen sleep and wake up many years later, none the worse.

But discoveries like that are probably still a ways off. So, it's fair to assume the internet's beloved water bears will continue be tormented, all in the name of science.