Want To See What A Shark Sees? This Camera Can Show You 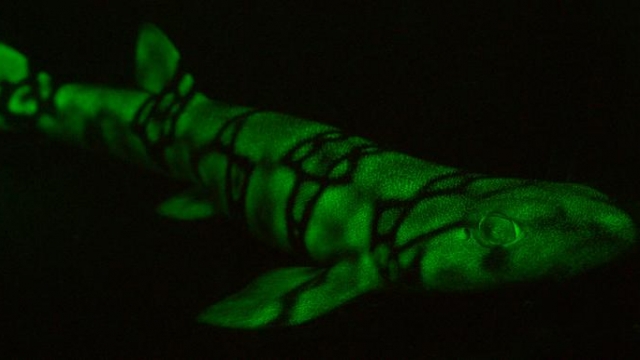 SMS
Want To See What A Shark Sees? This Camera Can Show You
By Ben Lawson
By Ben Lawson
April 26, 2016
Some catsharks can glow, and scientists are looking to better understand how they see to figure out why.
SHOW TRANSCRIPT

Scientists are trying to look through the eyes of a shark so they can understand why some can glow.

There are two species of catsharks that use biofluorescence — the chain catshark and the swell shark. But no one can say for certain why these sharks sometimes give off a green light.

So researchers with the American Museum of Natural History developed a camera that essentially mimics the way a shark eye sees.

Catsharks live deep underwater, where there is mostly only blue light. Researchers found that the sharks can only see in the blue and green spectrums.

Under the natural, low light, the sharks blend in with their surroundings. But through the lens of the shark-eye camera, they glowed a bright green, making them really stand out in their environment.

Which leads scientists to believe catsharks' glow may help potential mates find each other.

However, right now that's just a guess, and experts say they need to know more before they can determine exactly why catsharks and other fish glow.