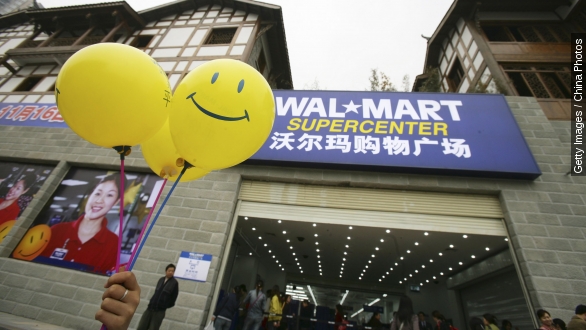 By Cliff Judy
April 29, 2015
Wal-Mart plans to open 115 new stores in China, but many retailers have struggled in that competitive market where Alibaba leads online sales.
SHOW TRANSCRIPT

When the going gets tough, the tough get building. That's the strategy for Wal-Mart in China — for now, at least — as the retail giant just announced plans to build 115 new stores by 2017. That increases Wal-Mart's presence in China by nearly a third.

Wal-Mart's CEO Doug McMillon announced the expansion during a Beijing press conference saying, "China is a key strategic market for Wal-Mart. Our goal is not to be the biggest retailer in China. We want to be the most trusted retailer." (Video via Stanford Graduate School of Business)

That's an ambitious plan even for the No. 1 retailer in the world. Many retailers are struggling in China's ultra-competitive market where Alibaba is already winning the e-commerce race. (Video via Alibaba)

While much is being made of the new brick-and-mortar stores Wal-Mart just announced, its plan in China to grow online sounds a whole lot like the U.S. plan McMillon talked about last week in a video for investors.

"And as we look forward investing in some of the new capabilities that we're developing, putting those together with the store experience — I think — will open up lots of opportunity for Wal-Mart to grow," McMillon said.

Wal-Mart already owns a majority stake in Chinese e-commerce company Yihaodian, which translates to "No. 1 store" in English. Many believe Wal-Mart will try to further integrate the site with its stores.

The trust thing McMillon mentioned earlier is difficult, too. Wal-Mart has had to battle food safety scandals in a country not nearly as regulated as the U.S. and shook up its leadership in China last year amid an investigation into company financial records and practices.

Wal-Mart does intend to close some underperforming stores in China and remodel or upgrade 50 others.

This video includes images from Getty Images and Chris / CC BY NC 2.0.