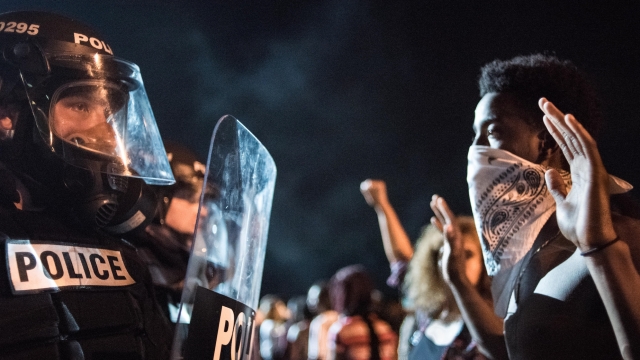 Community activists are calling for a boycott of businesses — rather than unrest — in Charlotte, North Carolina, to protest a deadly police shooting of a black man Tuesday afternoon.

"It's hunting season and the black male is the prey. And something has to be done," a religious leader said at a press conference Wednesday morning.

It all started late Tuesday afternoon at an apartment complex. Police were looking for a suspect who had a warrant for his arrest. Police say a man — not the one they were searching for — got out of his car and was holding a gun. North Carolina is an open-carry state.

"The officers felt a lethal threat and fired his weapon because of that," Charlotte-Mecklenburg Police Chief Kerr Putney said.

That man, Keith Lamont Scott, was pronounced dead at a local hospital.

Police said Wednesday morning they recovered a gun from the scene, contradicting what Scott's family and friends said.

"Reading a book, waiting for his kid to come home. Cops shot him for nothing," a man near the scene told WCNC.

Police said they didn't find a book at the scene. The officer who shot the man is identified as Brentley Vinson. He is also black. He was not wearing a body camera, though police said they do have video of the shooting.

Dozens of protesters gathered on the streets and brought a major highway to a standstill Tuesday night. Some threw rocks and bottles, jumped on police cars and set fires. Aerial footage of the scene showed some demonstrators taking packages off semi-trucks and throwing them into a fire.

Several protesters and police officers were injured, and some even needed to be hospitalized.