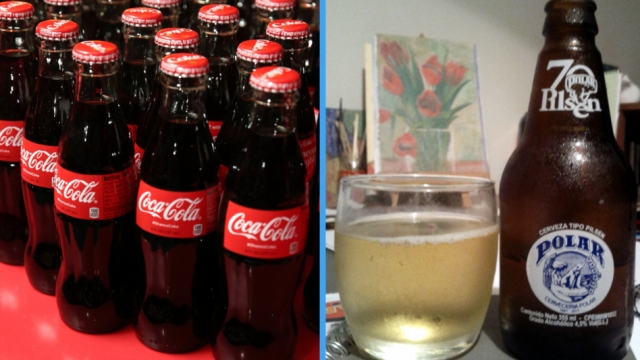 SMS
Venezuela's Food Shortage Drains Its Beer And Coca-Cola Supply
By Melissa Prax
By Melissa Prax
May 21, 2016
The shortage has forced some production plants to close.
SHOW TRANSCRIPT

Coca-Cola and beer might soon be harder to come by in Venezuela.

That's because the low price of oil, Venezuela's main export, has burdened the country's economy. Now, it's dealing with a food shortage, as well as riots, rolling blackouts and rising crime rates.

That food shortage includes sugar, which has halted production at the local Coca-Cola plant. And the country's largest beer manufacturer says a lack of barley forced them to stop production last month.

Venezuela actually imports its barley, but that large manufacturer — Empresas Polar — likely can't afford the ingredient seeing as it owes $160 million to its providers during a currency shortage.

Food isn't the only burden the South American country is facing. Officials expect the country's inflation to reach 720 percent this year. Comparatively, the U.S. is expected to reach a 2.4 percent inflation rate in 2016.

At the beginning of May, Venezuela's president tried to reverse the country's economic struggle by declaring a 60-day state of emergency.

Under the emergency plan, the government rationed food, water and power, and Venezuelans protested.

Protests are also fueled by the country's opposition movement, which is pushing to cut the current president's term short with a referendum.