US Navy Tests New Ships With Underwater Explosions. It's Hardcore 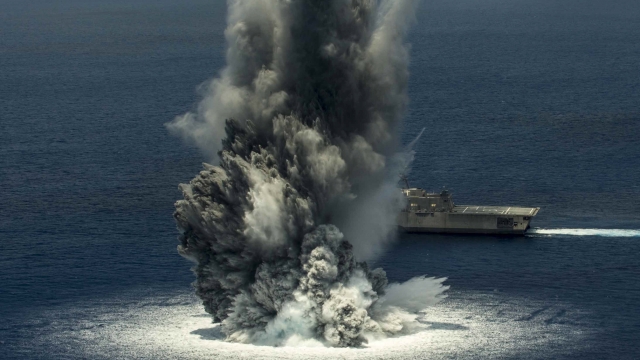 The U.S. Navy's use of explosives to test ships can be confused for earthquakes.

Over the summer, Floridians thought they felt the earth below them shift. Even seismographs registered activity resembling an earthquake.

But they later found out the shaking was from three test explosions, including this one. This is the USS Jackson completing the final phase of Full Ship Shock Trials or FSST.

SEE MORE: The Navy Just Got The Keys To The Most 'Advanced' Ship It's Ever Had

The goal of the trials is to make sure newly built ships can sustain underwater explosions.

Each blast was created with 10,000 pounds of explosives.

With all those explosives comes a serious risk of danger to both humans and wildlife.

The U.S. Navy says it notifies mariners ahead of the testing. It also says it monitors for mammals in the water and doesn't conduct testing if a mammal is nearby.

The U.S. Navy reports the USS Jackson fared well and had little damage.

The U.S. Navy put the USS Milwaukee through its first test explosion in early September. And just like the USS Jackson, it registered as seismic activity.