The US Is Down To Just One Major Nuclear Fusion Lab 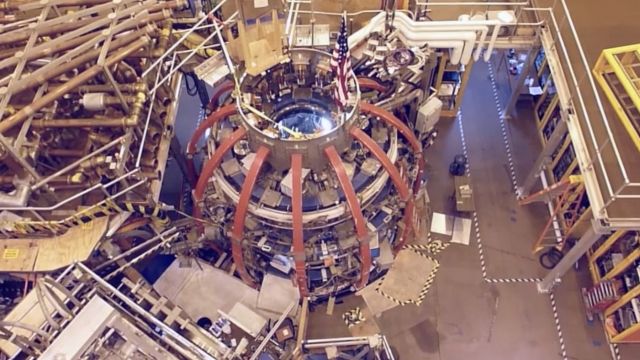 SMS
The US Is Down To Just One Major Nuclear Fusion Lab
By Evan Thomas
By Evan Thomas
October 1, 2016
A lab ran out of funds. Another broke. Now there's just one left to do fusion research for the U.S. Department of Energy.
SHOW TRANSCRIPT

We know nuclear fusion works. It's what keeps the sun going. But trying to do the same thing on Earth is tricky and expensive.

The U.S. Department of Energy funds three major fusion labs in the U.S.: One at Princeton University, one at the Massachusetts Institute of Technology and one in San Diego.

All three of these reactors use magnets to put hydrogen plasma under extreme heat and pressure. If we can get them hot enough, the hydrogen atoms will start to fuse with one another — and will release huge amounts of energy we can capture.

But no lab in the world has ever gotten them hot enough — and trying it just got harder because two of those three Department of Energy projects just went offline.

At Princeton, one of the magnets that steers the plasma has broken down. Researchers think it might have started to melt. Now the reactor could be down for repairs for as long as a year.

The reactor at MIT just ran out of funding, but that was expected. Congress planned to shut it down at the end of the 2016 fiscal year.

Now there's just one reactor left. It's at General Atomics in San Diego. Scientists aren't sure yet if it will be enough to keep their research on schedule.

For now, they're waiting — for repairs at Princeton and for new construction. The U.S. is part of an international effort to build one of the largest fusion reactors ever in southern France, which is expected to start up in 2025.