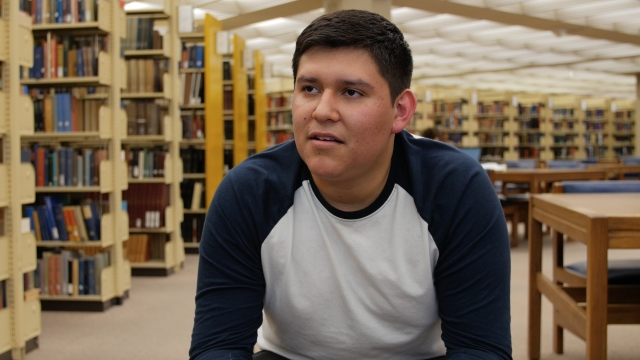 "The Deportation Defense Program's mission is to empower the community to fight back against this immigration system that has criminalized them, that is deporting them and that is separating their families," Mizraim Belman said.

"They're not sending their best," Trump said on CNN.

"We should deport them, we should build a wall, we should triple border patrol," Cruz said on Fox News.

Here at the University of Texas at Austin, students meet weekly to give advice and resources to the undocumented community.

"I'm undocumented, so this is an issue that's very important to me and that specifically pertains to myself and my family," Belman said.

"Well, what we want to do is educate and empower the community in protecting themselves from deportation," Yesenia Mondragon said. "Throughout growing up I could see my mom having a fear of driving, of being pulled over and then police questioning her."

"There's no doubt that families across Texas and across this country are living under constant stress of deportation, and it's something that weighs on people's minds all the time," Manny Garcia said.

"My mom was actually stopped only once and given a ticket only once, and I think I was seven years old. When that incident happened, the first thing that came to my mind was that she'd end up being deported."

"For my dad, when he was young, he had to drop out of school and start to work," Belman said. "So, I know that very well could've been a reality for me. We've been here in Austin, living for the past 13 years, going to school, really building a community here in Austin. And now, this is where I call home."