Under Clinton Pressure, Sanders Gets Specific on Health Care Plan 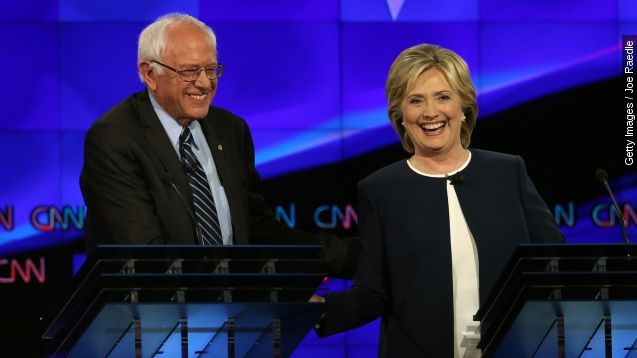 SMS
Under Clinton Pressure, Sanders Gets Specific on Health Care Plan
By Kate Grumke
By Kate Grumke
January 17, 2016
Under pressure from Clinton, and just hours before the debate, Sanders released a plan to pay for Medicare expansion.
SHOW TRANSCRIPT

Bernie Sanders has a lot of proposals to fight income inequality, but one has a particularly large price tag.

"Health care is a right of all people, not a privilege," Sanders said.

Analysts say Sanders' call for Medicare for all would cost as much as $15 trillion over 10 years. Sanders' own estimate isn't far from that.

And up until now, Sanders hadn't really explained how he planned to pay for that.

But, after pressure from Hillary Clinton,

"He hasn't told anyone how he's going to pay for them," Clinton said.

And, conveniently, just hours before the Democratic Debate, Sanders released his plan to pay for Medicare expansion.

He estimates the cost at $1.38 trillion per year, slightly lower than an estimate from a University of Massachusetts analysis on a similar bill.

Sanders says he would offset that cost with income-based health care premiums paid by employers and households, his tax plan which would raise taxes for the wealthiest Americans, and tax subsidies for health care becoming obsolete.