UFC 200 Lives Up To The Hype; Lesnar And Nunes Win Big 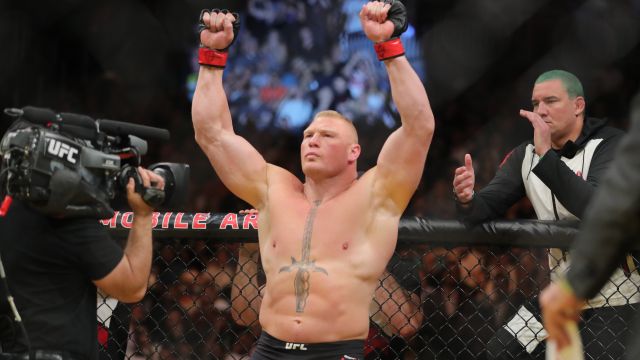 SMS
UFC 200 Lives Up To The Hype; Lesnar And Nunes Win Big
By Matt Moreno
By Matt Moreno
July 10, 2016
Brock Lesnar won decisively over Mark Hunt, and Amanda Nunes proved to be too much for Miesha Tate.
SHOW TRANSCRIPT

It was the biggest event in UFC history to date, and it definitely lived up to the hype.

The night started with a big win for Daniel Cormier over Anderson Silva. Cormier won by unanimous decision: 30-26 on all three judges' cards. That didn't come as a huge surprise as Silva only had a few days to train for Cormier.

Originally, Jon "Bones" Jones was slated for the fight, but he tested positive for a banned substance and was pulled from the card. That's when Silva stepped in to fight.

SEE MORE: Jon Jones Got Pulled From UFC 200, And People Are Livid About It

Following the Cormier fight was a dominating performance by Brock Lesnar in his return to the UFC octagon. Lesnar, who hasn't had a UFC fight in five years, defeated Mark Hunt, also by unanimous decision.

And in the night's final fight, Amanda Nunes pulled off a major upset over Miesha Tate for the women's bantamweight title.

Nunes tagged Tate with several punches to the head early in the first round. This one wasn't left up to the judges as Nunes finished Tate off with a rear-naked choke submission three minutes into the first round.

The win marks the third time the women's bantamweight title has changed hands in the last year.

Nunes hasn't yet announced who she might try to defend the title against, but it's got us all wondering if there's a Rousey return in the near future.