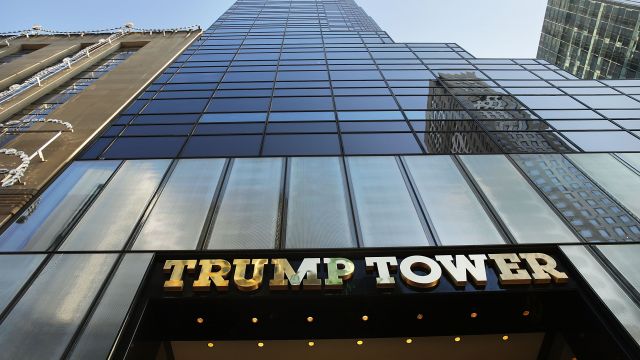 SMS
Trump Tower Rent Nearly Quintuples After Donors Take Over Payments
By Matt Picht
By Matt Picht
August 23, 2016
Trump is no longer self-funding the bulk of his campaign — which is now paying almost five times more rent than it used to for its Trump Tower HQ.
SHOW TRANSCRIPT

Donald Trump's presidential campaign has been raking in the money from individual donations recently. And the campaign's landlord — one Donald J. Trump — seems to be taking full advantage.

Trump's campaign headquarters started off as a bare-bones office suite in Trump Tower, paying about $35,000 in rent a month up until May. That was when Trump was still largely self-funding his campaign.

SEE MORE: Donald Trump Is Already Railing On The Washington Post's Bio About Him

Those rent hikes came just as individual donors took over the burden of Trump's campaign finances — individual donations jumped from around 20 percent of the campaign's cash intake in May, to around 90 percent in August.

The campaign says it's paying for larger premises within the building ahead of a staffing boost and pointed out Trump's $2 million donation during August dwarfs any money he receives from his business interests.

Despite the price hikes, Trump is still paying less for his campaign HQ than rival Hillary Clinton. The Huffington Post reports her suites of Brooklyn offices costs the campaign $212,000 a month. The site also notes Clinton's campaign employs about 700 staff, while Trump employs about 170 people.