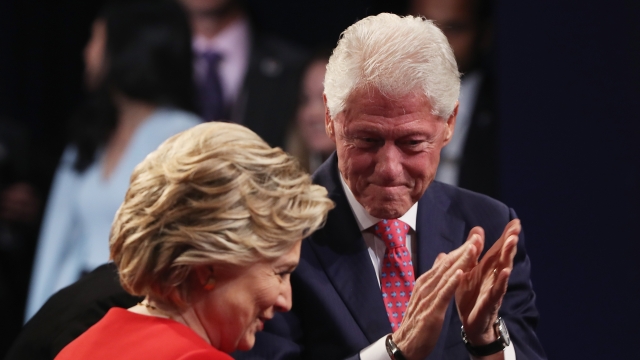 Bill Clinton isn't having anything to do with Donald Trump's latest attack line.

During a rally in Pennsylvania, Trump told his supporters, "Hillary Clinton's only loyalty is to her financial contributors and to herself. I don't even think she's loyal to Bill, you want to know the truth."

SEE MORE: Bill Clinton's Past Could Play A Big Role In The Next Debate

Trump also mocked Hillary Clinton's health during the speech, pantomiming her public stumble during her bout of pneumonia.

The former president brushed off a reporter's question about Trump's suggestion, saying simply, "He should run his campaign, and she'll run hers."

But some of Hillary Clinton's other surrogates weren't as taciturn.

Trump's unfounded speculations about Hillary Clinton's fidelity might indicate he plans to start attacking the Clintons' personal past more often. Trump previously said he didn't want to bring it up during the first debate.

SEE MORE: Bill Clinton: Obamacare Is 'The Craziest Thing In The World'

"I'm very happy that I was able to hold back on the indiscretions with respect to Bill Clinton. ... I'll tell you maybe at the next debate, we'll see," he told CNN.

GOP insiders aren't thrilled about Trump's tactics. One veteran strategist told The Hill, "The indiscretions, they were done by Bill Clinton, and Trump isn't running against Bill Clinton — which is good for him because Bill Clinton is more popular than Hillary Clinton. ... He needs to be talking about jobs, immigration and trade. ... Nothing is helpful except those three issues."