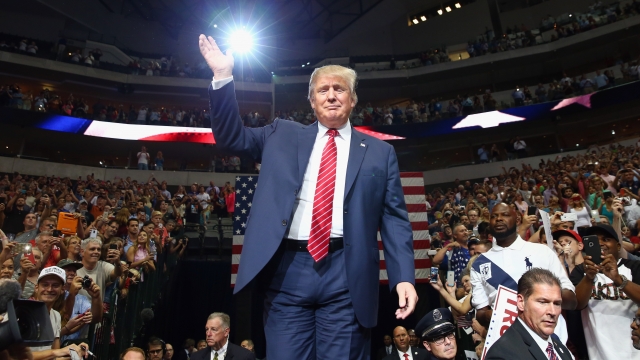 After two days of silence, Donald Trump's campaign has responded to criticism of a now-deleted tweet some believed to be anti-Semitic.

The meme, which was tweeted Saturday morning, shows Hillary Clinton against a background of hundred-dollar bills and what appears to be a Star of David with the phrase, "Most corrupt candidate ever."

In a pair of statements posted on Trump's Facebook page Monday night, the campaign maintained the star is not a Star of David but rather a sheriff's star.

The Trump campaign's social media director, Dan Scavino Jr., confirmed the image was lifted from a Twitter account that posts anti-Clinton images and said, "The sheriff's badge — which is available under Microsoft's 'shapes' — fit with the theme of corrupt Hillary and that is why I selected it."

The image was deleted and then reposted Saturday with a circle instead of a star.

Trump, meanwhile, blamed the criticism on Clinton. He said in a statement, "Clinton, through her surrogates, is just trying to divert attention from the dishonest behavior of herself and her husband."

Clinton's campaign released a statement earlier Monday that said in part, "The fact that it's a part of a pattern should give voters major cause for concern."

As first reported by Mic, the meme started circulating last month on an image-board website known for racist and anti-Semitic posts. A week before the Trump campaign used it, the meme appeared on a Twitter account that frequently posted anti-Clinton and anti-Muslim memes. The account has since been deleted.

The Anti-Defamation League's CEO and national director told The Daily Beast, "We've been troubled by the anti-Semites and racists during this political season, and we've seen a number of so-called Trump supporters peddling some of the worst stereotypes all through this year."

Trump's daughter and son-in-law, who are Jewish and deeply involved in the campaign, haven't commented.

This video includes clips from the Anti-Defamation League and images from Twitter / @DanScavino, Twitter / @FishBoneHead, 8chan via archive.is and Getty Images.