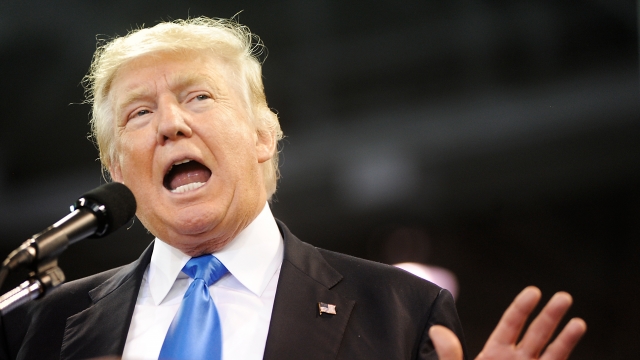 SMS
Trump Says Drugs Are A 'Very, Very Big Factor' In Charlotte Protests
By Grant Suneson
By Grant Suneson
September 22, 2016
In a speech, Donald trump said drugs played a major role in the protests, but he didn't offer any proof of that.
SHOW TRANSCRIPT

Protests erupted in Charlotte, North Carolina, after a police officer shot and killed Keith Lamont Scott while serving an unrelated arrest warrant. But Donald Trump seems to think something else helped spur the civil unrest.

"And if you're not aware, drugs are a very, very big factor in what you're watching on television at night," Trump said at a conference in Pittsburgh.

Trump's statement doesn't make it clear if he's talking about the protesters themselves being on drugs, or if he's saying the illegal drug trade has caused unrest in the Charlotte area. Trump didn't offer any proof to support his hypothesis one way or the other.

There are still conflicting stories about what exactly happened in the moments before Scott's death. Police said they found a gun on Scott, and he was killed because he presented "a lethal threat." Scott's family said he was reading a book in his car while waiting for his son to come home from school.

Trump also seemed to pin the blame on President Obama, saying, "There's just no unity. There has to be a unity message that has to get out, and it starts with leadership."

Painting himself as the candidate to restore law and order, Trump promised to employ "the best prosecutors, investigators and federal law enforcement officers" to cut down on crime.

He added that police need to be trained better than they are now and held responsible for any wrongdoing.