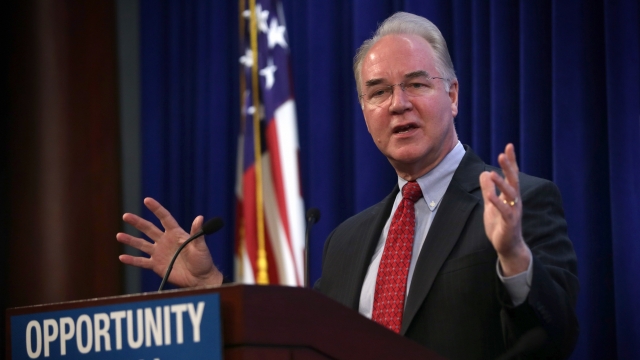 U.S. Rep. Tom Price of Georgia has been nominated to head the Department of Health and Human Services.

The former orthopedic surgeon has been an outspoken critic of Obamacare, something President-elect Donald Trump said he would repeal and replace.

Trump has since walked back that campaign promise, and no one knows how much, if any, of the Affordable Care Act that Trump will keep. Price has been coming up with alternative health care plans ever since Obamacare was first drafted in 2009.

And Price was a contributor to the "Better Way" health care plan House Speaker Paul Ryan is now pitching.

Ryan seems to be pretty happy with Trump's nominee. He said in a statement: "This is the absolute perfect choice. ... We could not ask for a better partner to work with Congress to fix our nation's health care challenges."

Price was a member of the Georgia state Senate for eight years before he was elected to the U.S. House in 2004. He's currently the chairman of the House Budget Committee.

The Senate still has to confirm his nomination. As secretary of the Health and Human Services Department, Price would oversee agencies like the Food and Drug Administration, National Institutes of Health and Centers for Disease Control and Prevention.