'Trump Of The East' Becomes The Philippines' New President 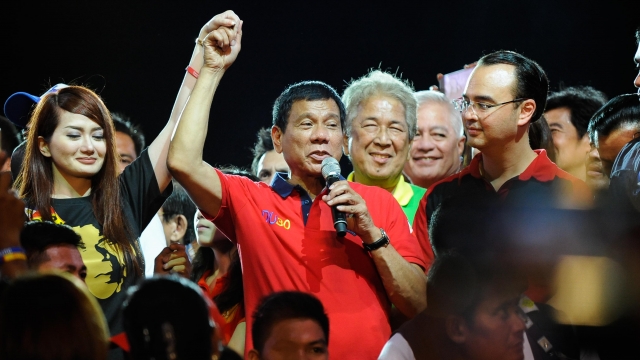 There’s a brash, outspoken politician known for ruffling feathers and drawing huge crowds to his rallies who just became president. That's not a prediction for America; it's a reality in the Philippines.

Rodrigo Duterte has declared victory in the Philippines' presidential election, beating his closest challenger by more than 15 percent of the vote.

His often offensive, off-the-cuff speaking style earned him the nickname "Trump of the East." But Donald Trump has nothing on Duterte when it comes to shocking sound bites.

Just in the last year, Duterte made light of a missionary who was raped and murdered in a prison riot, bragged about having mistresses and even called the pope a "son of a whore."

But his most defining characteristic is his tough-on-crime attitude. Duterte promised to execute 100,000 people if elected, and he’s come out in favor of extrajudicial death squads that have popped up under his watch.

While he was mayor of the Philippines’ third-largest city, Davao, authorities reportedly armed and trained civilians to murder suspected criminals.

Duterte himself even admitted to participating in the vigilante-style murders: "Yes, of course. I must admit I have killed. ... I killed about three people."

Human Rights Watch said over 1,000 petty criminals were killed in Davao since 1998, and Duterte was the mayor for a majority of those years. The organization said Duterte "will pose a grave danger to the safety of the citizens."

It’s not that other Philippine politicians didn't try to stop him. Lame-duck President Benigno Aquino tried to unite the four other candidates against Duterte and warned citizens that if he were elected, it could usher in a new dictatorship.

But nothing was able to stifle Duterte’s popularity. Supporters like his outsider status and his pledges to eradicate poverty, corruption and crime in the Philippines.