Palin Seems Eager To Win A Spot In Trump's Cabinet 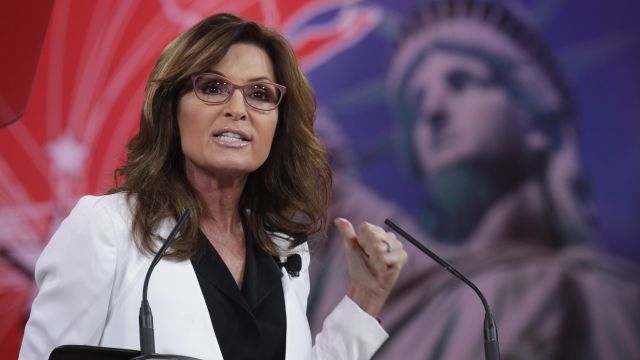 SMS
Palin Seems Eager To Win A Spot In Trump's Cabinet
By Lauren Stephenson
By Lauren Stephenson
November 30, 2016
She shared a video touting her commitment to veterans after reports surfaced that she's being considered for secretary of Veterans Affairs.
SHOW TRANSCRIPT

Sarah Palin was one of the first high-profile politicians to endorse now President-elect Donald Trump. And like a number of people who remained loyal to him during the campaign, Palin is apparently being considered for a Cabinet position.

The former governor of Alaska and 2008 Republican vice presidential candidate is reportedly in the running to be Trump's pick for secretary of Veterans Affairs.

And she seems to want the position — at least according to her Facebook activity.

On Wednesday, Palin shared a three-day-old post from her son-in-law, Marine Corps Sgt. Dakota Meyer. Meyer, who is a Medal of Honor recipient, said, in part: "We have to push our leaders to remember the promises our nation makes to veterans. And I've never met anyone who supports our troops and loves our country more than my mother-in-law, Sarah Palin."

SEE MORE: Want To Sit During A Debate? Sarah Palin Notes It Helps To Be A Man

In the nearly three-minute video, Palin appears to lay out an agenda on how the government can better serve U.S. veterans.

Palin's son Track served in the U.S. Army. She has discussed the struggles her son has faced after returning home from duty.

In sharing Meyer's post, Palin also praised Trump's commitment to veterans while also including a link to a story about being considered for secretary of Veterans Affairs.