Trap Karaoke Is About More Than The Music 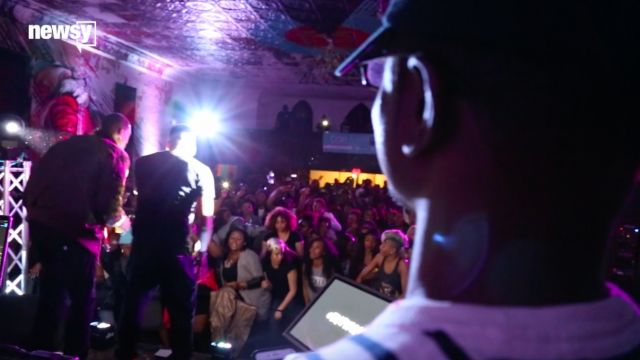 "It's not just karaoke," said Lowkey, the host of Trap Karaoke.

"We basically brought water to the desert is what someone quoted and said to me directly," said Jason Mowatt, the creator and organizer of Trap Karaoke. "We started out really simple. We found a venue on the lower east side."

"And it was probably 80 people, but we packed out a small bar," Wall said about the first Trap Karaoke show.

"The growth has just been awesome, man," Mowatt said. "It's been really cool, and the thing I'm really proud of is all of this is organic. I'm a big believer that culture beats strategy."

Trap music is a genre of hip-hop that originated in the South and is largely characterized by 808 kick drums, heavy sub-bass lines and an aggressive rapping style.

Trap Karaoke is a place for people to perform trap music (among other things) — an opportunity that does not exist at traditional karaoke bars.

"You think about karaoke and the songs that are offered at these bars and these venues; none of the stuff that we listen to or we champion is available," Lowkey said.

"I really don't like the entertainment business, quite honestly," Mowatt said. "For me, it's just fun to challenge the status quo and just kind of push things forward. I really like this idea of the user-generated concert. I think it's really compelling."

"The way I described it to Jason when we first thought about the concept was I knew it was going to be therapeutic," Wall said.

"The response I've seen has really inspired me to try to make this something bigger than just another turn-up," Mowatt said. "We don't see ourselves as party promoters — we see ourselves as a community organizers."