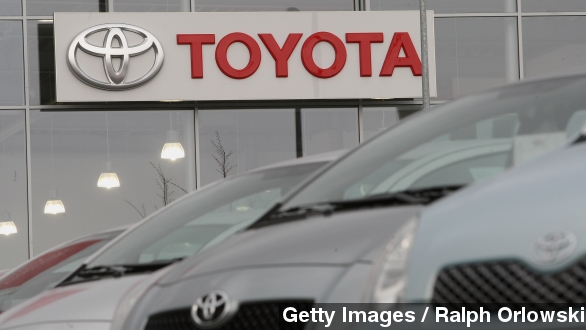 SMS
Toyota's Time As World's Top Car Seller Nearly Over?
By Cliff Judy
By Cliff Judy
January 21, 2015
For the first time in 15 years, Toyota expects sales in the coming year to decrease, putting it in Volkswagen's sights as the world's top car seller.
SHOW TRANSCRIPT

Toyota’s days atop the car sales pyramid may be numbered as the company announced its projected sales for 2015.

Although the company announced worldwide sales for 2014 grew 3 percent — and that still makes Toyota the world’s top seller — the Japanese automaker also projected sales in 2015 to drop a percent.

It’s the first time in 15 years Toyota projected worldwide sales to drop. Much of it is due to what the company believes will be significantly lower demand in Japan.

Those numbers have plenty of analysts predicting Volkswagen will soon be the world’s No. 1 auto brand. The German manufacturer just announced 2014’s sales came in only 90,000 vehicles shy of Toyota. (Video via Volkswagen)

Volkswagen’s made no secret of its expansion efforts in trying to unseat Toyota as the top seller.

But some aren’t so sure giving up the car sales title would be such a bad thing for Toyota.

The company didn’t even release projections in 2009 because of the financial crisis and a massive oversupply of unsold cars — underlining the need for measured growth.

As a Moody’s analyst told Bloomberg: "Their focus is not No. 1. Toyota is more concerned about keeping profitability than chasing numbers. So for coming years, I wouldn’t be surprised to see Toyota selling fewer cars than VW."

So company execs appear to be tipping their hat toward their own slogan of “moving forward,” just not so fast the money can’t keep up. Toyota’s been the world’s top seller since it unseated GM in 2012. (Video via Toyota)