Top 3 Weird (Yet Adorable) Animal Stories Of The Week 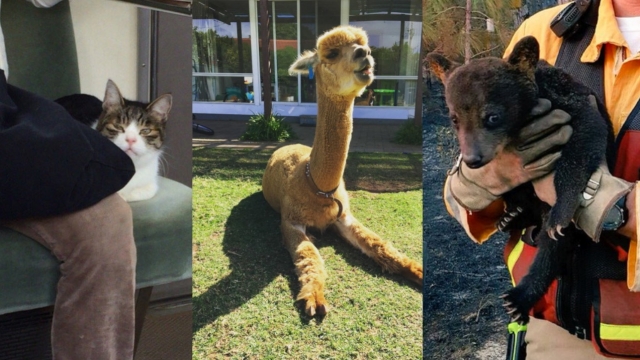 SMS
Top 3 Weird (Yet Adorable) Animal Stories Of The Week
By Katherine Biek
By Katherine Biek
April 9, 2016
This week, we talk about the cat that rides the Tokyo rail system, a family's pet alpaca and a bear cub that was saved from a wildfire.
SHOW TRANSCRIPT

We'll start with a cat that's mastered the art of riding the subway.

The feline, which lives in Tokyo and doesn't appear to have an owner, has been using the rail system since at least 2013, according to a local news outlet.

A writer for The Dodo praised the cat's "excellent subway etiquette," writing, "He never manspreads — instead, he keeps himself curled up in a neat, compact ball, so that other passengers have plenty of room."

Next, if your parents won't let you get a pet dog, an alpaca is apparently the next best thing.

Chewy is a 2-year-old alpaca who lives with Matt and his family in Australia.

The alpaca even has his own Instagram account and is often shown hanging out in his family's backyard and chewing on various items.

BuzzFeed reached out to Chewy's owner, who said an alpaca requires less maintenance than a dog because he doesn't "have to feed him regularly or give him as much attention."

But there is apparently one downside to having an alpaca as a pet. Matt told the Gold Coast Bulletin that Chewy sometimes spits at people.

And finally, we've got a bear cub who was rescued by firefighters putting out a wildfire in central Florida.

Thankfully, the little bear was given a clean bill of health, even though it had a few minor burns from the blaze.

The firefighters even named the cub Smokey Junior, presumably after Smokey Bear.