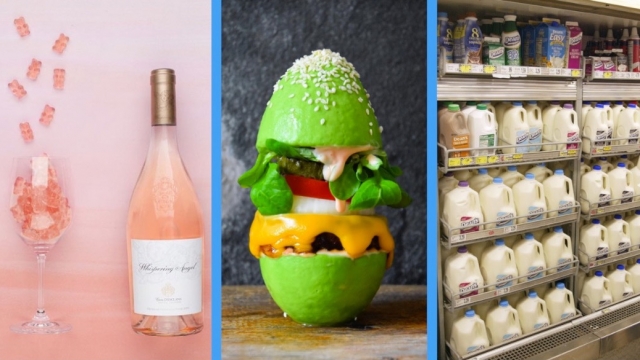 Amid all the Democratic National Convention news this week, there were a few nonpolitical stories that stuck out for being truly bizarre— and strangely enough, a lot of them involved food.

The alcohol-infused candy has been so popular since it debuted online in late June that there's reportedly a 14,000-person wait list to snag a box.

The company's co-founder told NBC, "We've had a few people write elaborate poems to try to charm us into getting to the top of the list."

Thankfully if you want to get on the wait list, there are plenty of other alcohol-infused gummies to buy, like champagne and pale-ale candies.

SEE MORE: Top 3 Animal (and Pokémon) Stories That Made Our Week

Next, a food blog called Food Deco is trying to get us to rethink the hamburger — by replacing the traditional bun with an avocado.

In what's sure to be somewhat of a slimy mess, the blog says people should take an avocado, slice it in half, skin it and then remove the pit.

People magazine appeared to love the idea of an avocado bun, but a reporter for Metro was totally against it, writing: "Leave the buns out of this. They deserve their place on the burger. They've earned it."

We saved the grossest for last: Cockroach milk. As in — milk from cockroaches.

The so-called "milk" comes from the Pacific beetle cockroach: It's a formula rich in protein that the insect feeds its young.

CBS reports the cockroach formula has "three times the energy of the equivalent mass of normal dairy milk."

Researchers from India say it'll be quite a while before we see cockroach milk on store shelves. But there's a chance it could one day be used in protein drinks.

This video includes images from Instagram, Getty Images and Sugarfina.