Top 3 Animal (and Pokémon) Stories That Made Our Week 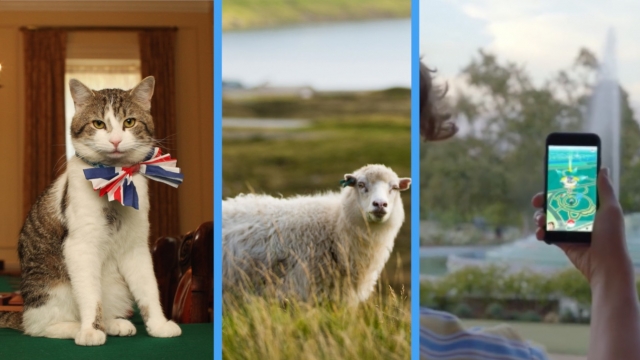 Thanks to social media and YouTube, there's no shortage of viral animal videos. But this week, a bunch of animals made the news for more than just being cute, funny or larger than life.

First was Larry the cat. The feline is a pretty big deal in Great Britain since he's the chief mouser to the Cabinet Office.

That means Larry is in charge of catching mice at 10 Downing Street where the British prime minister lives.

Larry arrived at Downing Street in 2011 when David Cameron was in office.

So headlines were made when the government announced the cat would be staying despite Cameron stepping down and Theresa May taking over as the new prime minister.

Still, before leaving office, Cameron posted a photo to Twitter of him with Larry as "proof" he genuinely cares for the feline, despite rumors to the contrary.

Next, we venture to an archipelago in the Atlantic Ocean called the Faroe Islands, which has yet to be covered on Google's Street View.

In an effort to get people interested in visiting, a member of the islands' tourist board strapped some cameras to a bunch of sheep and let them loose in some remote locations.

Why sheep? Well, Gizmag reports the sheep population on the islands is almost double that of the human population.

As for Google? It told The Huffington Post, "We're feeling a bit sheepish that the Faroe Islands are not yet on Street View."

Finally, if anything has taken over the news this past week, it's "Pokémon Go," a mobile game that has players capturing and battling creatures called Pokémon — you might have heard of them.

It's estimated around 21 million people are playing the game daily, which makes it the biggest mobile game in U.S. history. And within days of launching, "Pokémon Go" was already installed on more Android devices than the Tinder dating app.

Because a lot of users are obsessively playing the game, plenty of museums and memorials have had to kindly ask people to put their phones away.

This video includes clips from BBC, 10 Downing Street, Visit Faroe Islands and The Pokémon Company and images from Getty Images.