Tom Vilsack Is A Safe VP Pick, Which Is Probably A Plus For Clinton 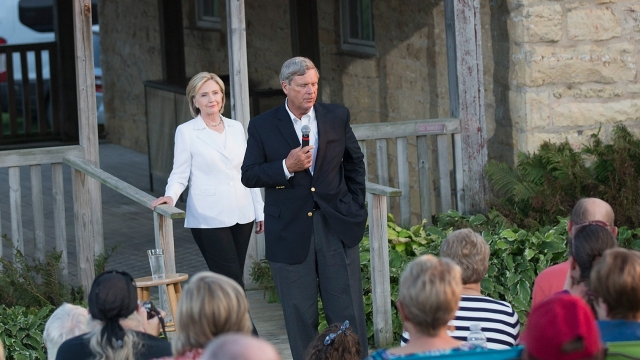 SMS
Tom Vilsack Is A Safe VP Pick, Which Is Probably A Plus For Clinton
By Eugene Daniels
By Eugene Daniels
July 19, 2016
Clinton doesn't have long to choose a veep. She's expected to campaign with her pick this weekend.
SHOW TRANSCRIPT

Have you ever heard of Tom Vilsack? No? Well, he could be the next vice president of the United States. At least according to the latest round of Hillary Clinton veepstakes news.

If true, Vilsack isn't a bad choice at all. He was already vetted for the job by John Kerry's presidential campaign in 2004; he's been a mayor, state senator and a governor, and he's currently the head of the U.S. Agriculture Department.

Not only that, he's been a member of #ImWithHer well before hashtags were even their own language; he endorsed Clinton during her first run for president and they really seem to get along. And actually liking each other is just a tad important when creating a ticket.

And just like another name expected to be at the top of Clinton's list — Tim Kaine — Vilsack is a safe choice for Clinton. Some may say both men are boring; but honestly they're probably boring in a good way.

Also on Clinton's vetting list is Sens. Elizabeth Warren and Cory Booker and two other members of the Obama administration: Secretary of Labor Tom Perez and Secretary of Housing and Urban Development Julián Castro.

The first rule of being the second-in-command is do no harm. Veep picks don't really change the election like they used to, since people tend to vote for or against the top of the ticket, but they can hurt a campaign.

Vilsack is likely someone who will stay on message. And for a campaign that is going to great lengths to dodge bad news land mines this election season, that may be at the very top of Clinton's list.