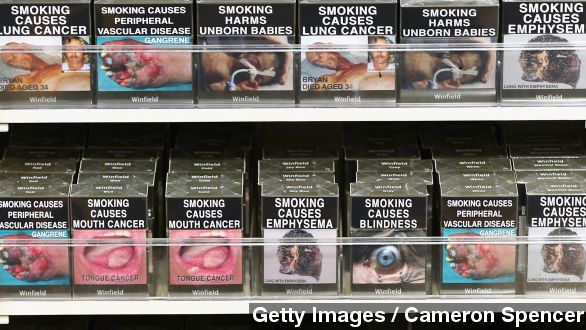 Smoking rates have been decreasing over the past few years, and now several studies say plain packaging has something to do with that decline.

At least in Australia, where back in 2012, the government began requiring all tobacco packs to no longer have logos, trademarks, pictures or colors.

Now, we should point out the term "plain packaging" is really a bit of a misnomer.

Australia's government does allow health warnings to be placed on the packaging, some of which are pretty tough to look at.

Several studies determined regular packaging with the colors and images act "as an unconscious trigger for smoking urges," and that removing those triggers draws more attention to the health warning on the packaging.

Last year, The Independent reported Australia's smoking rate decreased by 15 percent between 2010 and 2013.

The Australian Institute of Health and Welfare discovered other changes in smoking trends.

"Even if standardized packaging had no effect at all on current smokers and only stopped 1 in 20 young people from being lured into smoking it would save about 2,000 lives each year," the editor-in-chief of the journal Addiction said in a press release.

These findings are now even more important as the U.K. is set to follow in Australia's footsteps.

"It just makes you almost happy by looking at it," a child says in the organization's video.

While UK's government put out a press release in January stating it backed the bill, others aren't on board, like right-wing politician Nigel Farage who tweeted, "Plain packaging is an appalling intrusion into consumer choice and the operation of the free market."

Parliament is set to vote on whether or not to move forward with plain packaging in May. If approved, it would take effect in 2016.