This Little Girl May Have Inspired Obama's Trip To Flint, Michigan 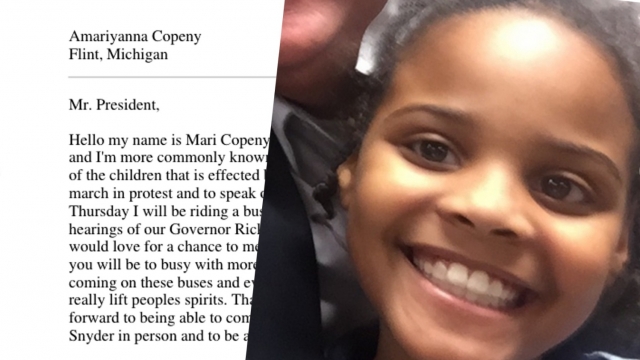 SMS
This Little Girl May Have Inspired Obama's Trip To Flint, Michigan
By Katie Link
By Katie Link
April 27, 2016
In response to Mari's email, President Obama wrote, "Like you, I’ll use my voice to call for change and help lift up your community."
SHOW TRANSCRIPT

The president of the United States is an unlikely pen pal. And yet, President Obama has put pen to paper a couple of times lately.

Mari Copeny, an 8-year-old from Flint, Michigan, wrote to Obama back in mid-March asking for the chance to meet him and the first lady when she came to Washington, D.C.

Mari was headed to the Capitol with her family to watch Michigan Gov. Rick Snyder testify at a congressional hearing about his involvement in the Flint water crisis.

Mari — who has earned the nickname "Little Miss Flint" — wrote, "I've been doing my best to march in protest and to speak out for all the kids that live here in Flint." She continued on to say that she understood the president was busy but noted that a meeting with him "would really lift people's spirits."

Well, Obama is ready to lift those spirits. He responded to Mari on Wednesday, saying he’s traveling to Flint on May 4. He wrote, "Like you, I'll use my voice to call for change and help lift up your community."

Mari’s mom shared the news with her daughter at school. "He’s coming to Flint to meet you, because you wrote him before we went to D.C. What do you think? You can freak out. Go ahead."

A letter from a different young girl made headlines after she wrote the president asking for a picture of a woman to be on U.S. currency. That dream recently came true, too.

Either Obama's secretary deserves some credit for bringing these particular letters to the president's attention, or the key to getting things done on Capitol Hill is being a young girl with big ideas.

This video includes clips from WHDH and images from Getty Images.