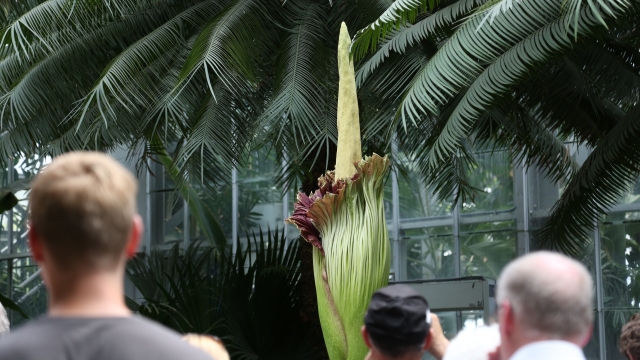 "The first five or six hours, it definitely was giving kind of the dead-animal, rotting-flesh smell where the name corpse flower comes from," said Devin Dotson, a communications specialist with the U.S. Botanic Garden in Washington, D.C. "But it kind of changed in the early afternoon to a cabbage sort of smell. And then late that night, it was kind of like hot trash."

This flower doesn't bloom often. So when it does, everyone gets super pumped. People waited in line for hours on the first day it bloomed at the garden in Washington.

"It's a rock star plant. People love to see it. It has such a unique story both of its size, its unpredictability and its horrible smell," said Dotson.

The flower blooms randomly, and it could bloom once in a decade or as often as back-to-back years. When it does, it only blooms for 24-72 hours.

This year, a bunch of corpse flowers are blooming across the country, from Florida to Missouri. Experts don't really know why they're all blooming at once. Some think it's possible the plants in the U.S. are all related.

"We're looking into a few ideas about why there might be multiples blooming," Dotson said. "It's totally smelling because it wants to attract pollinators. It's all trying to reproduce."

But the plant's smell wouldn't attract your average flower pollinator, like a bee.

"Flies, carrion beetles who are looking for something that smells like rotting flesh. It heats up on the first day that it opens. It can reach as much as 100 degrees. In the wild, it can move its scent as far as a mile away from a single plant."