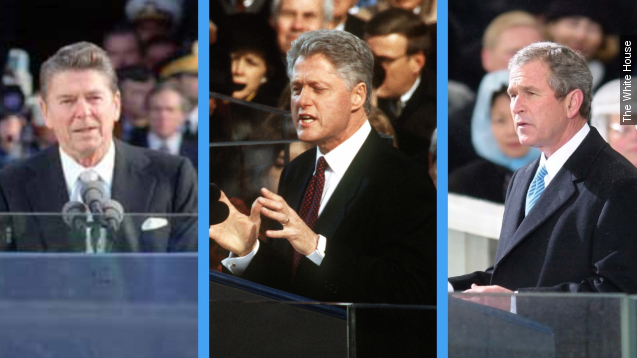 SMS
These Lame-Duck Presidents Actually Got A Lot Done In Their Last Year
By Eugene Daniels
By Eugene Daniels
January 1, 2016
President Obama might look to Reagan, Clinton or Bush 43 for a road map on getting his goals accomplished in his last year in office.
SHOW TRANSCRIPT

With one year left, kicking your feet up after going from this to this may be tempting.

Tempting but not likely. So what lessons can Obama learn from the final year of recent two-termers?

Lesson 1: Hope for no money problems.

George W. Bush spent basically all of 2008 dealing with the Great Recession. His approval ratings went way down. But he had success on the domestic front with the Economic Stimulus Act and the bank bailout.

After a not-so-great couple of years, in President Bill Clinton's final year, he signed a bill solidifying trade partnership with China, which helped China get into the World Trade Organization.

Despite (almost) impossible odds, President Ronald Reagan never stopped trying to quell tensions with the Soviet Union. The arms-control agreement, called the INF Treaty, was ratified during his final year.

Most importantly, just try not to leave a big mess for one of these folks to deal with.

This video includes images from Getty Images and music from Birocratic / CC BY ND 2.0.